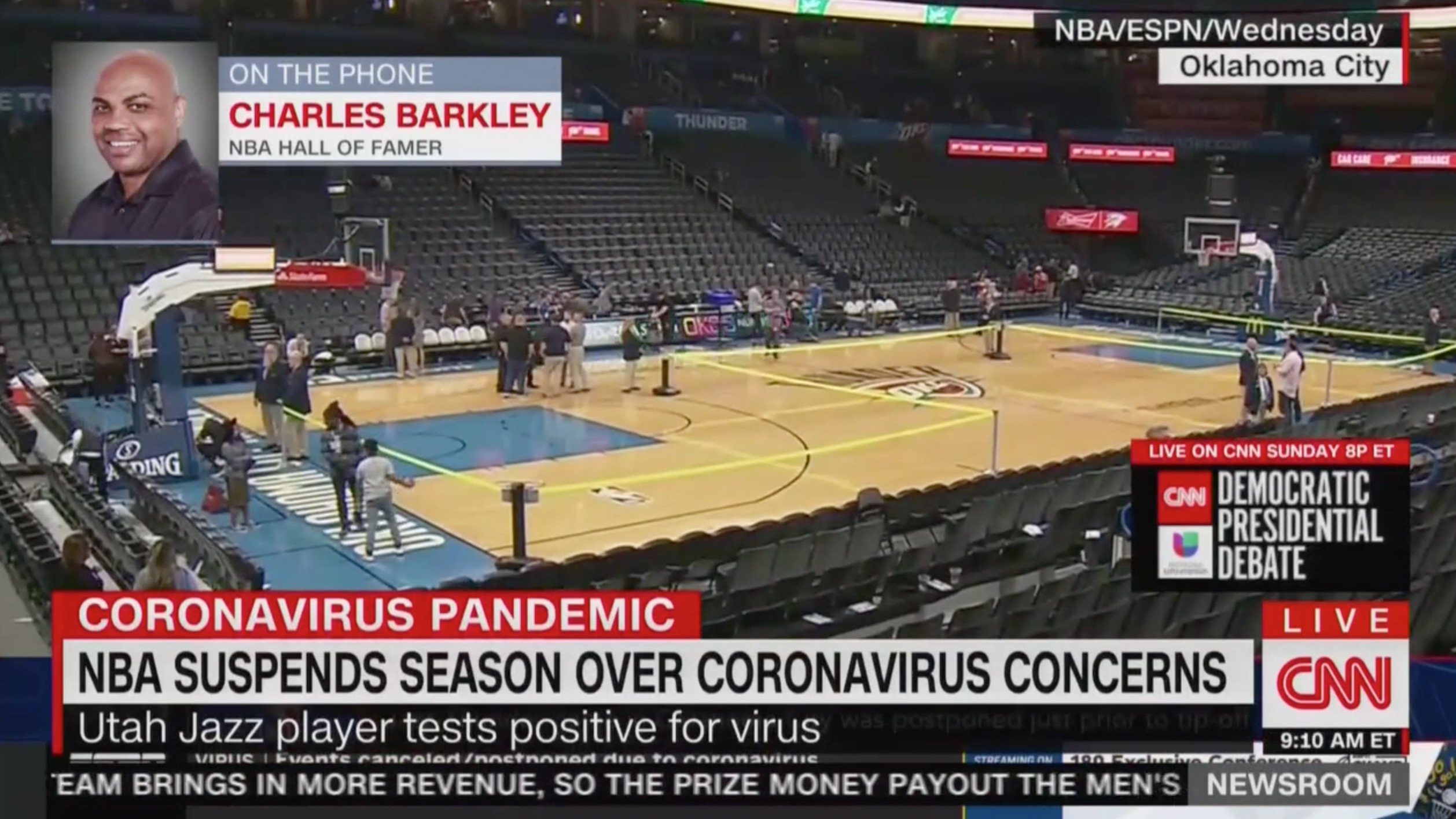 We do not yet know what the final impact of the coronavirus will be on the medical health of the United States. Currently, you can logically argue that it could be the most devastating development in our modern history, or that it will not ultimately cause a massive amount of deaths, at least not when compared with the yearly toll associated with the common flu.

After yesterday, however, we now know for sure that the cultural impact of the coronavirus will be historical, unprecedented, and maybe even permanent. This is because of an avalanche of cancellations related to iconic events, many of which cannot ever be rescheduled.

Most of these have come in the realm of sports, with the most impactful being the total cancellation of the “March Madness” NCAA basketball tournament (as well as, rather prematurely, the termination of lots of smaller championships, with no real crowds, which were not even scheduled for several months).

This came after a domino-like series of cancellations, which included the NBA, NHL, and Major League Baseball all putting their seasons on “pause” for at least the next few weeks, and probably longer than that (in response, Little League baseball appears to be doing something similar).

Disneyland, followed quickly by nearby Universal Studios, joined numerous school districts throughout the country by shutting down until at least the end of the month. There is no doubt that, in a snowball effect, all of these cancellations will cause even more events to be stopped and there is less and less political cover for organizers to stand their ground, all while the threshold for deciding to scrap them altogether gets progressively lower (we here in Southern California are bracing for our daughter’s school administrators to soon cave in and follow what so many other school districts elsewhere have already done by cancelling classes).

To be very clear, I understand, and in concept support, that the strategy here is to slow down this apparent pandemic so that our healthcare system may not get completely overwhelmed all at once, and to buy time for the structure to get at least somewhat ready for this predicted catastrophe. It would be both naïve and inaccurate, however, to conclude that this was the only, or even the prime, motivation impacting the decision-making behind many of these cancellations.

Let’s face it, much of this is about politics. Not the Democrat vs. Republican type of politics (though, I do agree with those who say that at least some of this movement, even if just subconsciously, is being driven by an extreme anti-Trump sentiment among the mostly liberal elites who are making these decisions), but rather the personal variety.

In short, this is mostly about not wanting to be blamed if an event goes on and something awful happens. If no one important cancels their similar event, then no one else can really be held accountable because, after all, everyone has the political cover of other entities in their realm having made exactly the same call. Instead, the inverse phenomenon has transpired.

This “Cancellation Contagion” began in sports with the Ivy League, the ultimate bastion of liberal elitism, completely calling off their conference basketball tournament at a time when everyone else was simply considering maybe not allowing spectators. Much like when The New York Times is the first to report big news and everyone else in the mainstream media feels a moral obligation to shadow them, in academia everyone has a strong inclination to follow the Ivy League’s lead, for fear of looking bad to their peers if they don’t do so and then something goes wrong.

This, along with a simultaneous series of high-profile college closings, set off a wildfire of cancellations which made it politically and logistically impossible for the NCAA to hold their basketball tournament (which provides almost all of their yearly revenue) even without spectators. Similarly, on the professional side of the equation, the NBA suspending play gave the NHL, which plays in many of the same arenas, no choice but to do the same, which then forced baseball (despite having some significant advantages which might have allowed them to go on as planned without spectators) to follow suit.

This is not to say that these decisions will ultimately turn out to be at all misguided. Basketball, for instance, is a sport, and because you have players literally sweating all over each other, in close contact and indoors, it’s an event which is particularly conducive to spreading disease.

Interestingly and tellingly, the last major holdout in the sporting world was the PGA Tour. Golf, especially without spectators, has unique aspects which makes it far less vulnerable to spreading coronavirus than other endeavors, and also has a fan base which are far more conservative, on average, than the others.

Consequently, they were not under quite the same pressure to virtue-signal to the rest of the world just how incredibly against the coronavirus they really are by shutting down completely, but after all other sports left them no way to cover their own backside and avoid a PR nightmare, they reversed their previous decision and cancelled their premiere event, the Players Championship, after the first round had already been completed. Personally, I will not believe that all these cancellations were absolutely warranted at least until Augusta National Golf Club, the last major institution in America virtually — though not totally — immune from political pressure, decides to not play this year’s Masters golf tournament in April (which I now believe will likely be what happens).

As a philosophical libertarian, the precedents being set here on literally an hourly basis are extremely concerning. Based largely on possibly subjective projections and extrapolations from scientists with a very limited base of reliable data, our elites have chosen to take away personal choice and responsibility in a manner which has already been extremely disruptive to our lives and economy, maybe forever.

Therefore, there are almost no outcomes here which are not disastrous in some significant way.

Obviously, if the coronavirus is indeed as horrific has we are being warned it will be, that will cause a horrendous number of people to be sick and die. If it is not, then it will be perceived by those who made these decisions, regardless of what the facts actually are, that these cancellations saved the day, and then it will become even easier to shut everything down the next time there is some sort of threat to public health.

On the bright side, at least we have a president in the White House in whom we can all trust to unify the country with honesty, and selfless and competent leadership.