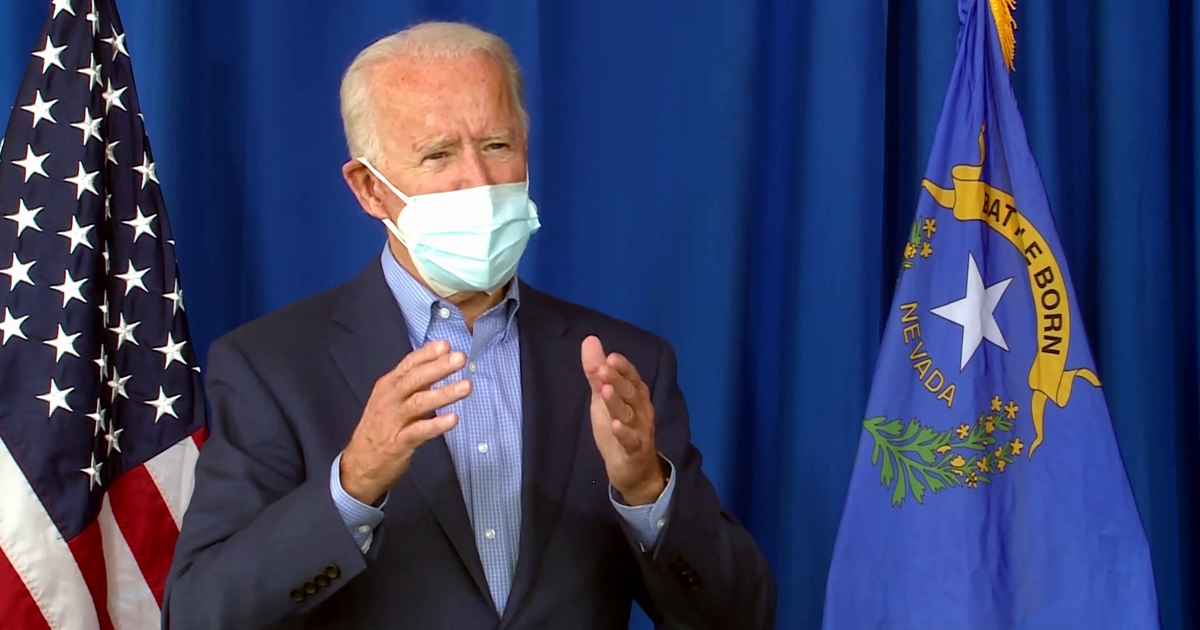 The question isn’t going away.

After days and days of ducking, the media is more curious than ever about former Vice President Joe Biden’s position on packing the Supreme Court. Thanks to his persistent refusal to respond, the question will continue to be asked until he gives a straight answer.

Ross DiMattei, a reporter for Las Vegas ABC affiliate KTNV, took a run at the Democratic presidential nominee over the weekend. And like numerous others who set out to get the former vice president on the record about court packing, he got stonewalled.

“No they don’t deserve,” the former vice president said.

While many journalists have chided the Democratic nominee for his non-answer, a sizable faction has emerged defending Biden — or, at least, explaining away his dodges.

The absurdity of media figures standing with Biden rather than their peers on this issue was captured by The Atlantic’s McKay Coppins.

“[I]t’s slightly weird to see *journalists* echo the ‘smart strategy’ talking point instead of, you know, trying to get the likely next president on the record about a serious issue!” Coppins wrote on Twitter Saturday.

Let’s be clear: There is no equivalence between Biden’s refusal to provide a straight answer on this one issue, and the scores of falsehoods, dodges, and deceptions regularly offered up by President Donald Trump. None. Nada. Zip. As such, they should not be given anything close to equal weight.

But therein lies the fundamental problem with the media’s coverage of Joe Biden throughout the campaign. The former vice president has been viewed entirely through the prism of his opponent. By adopting this coverage style, the fourth estate has been utterly derelict in its duty of vetting Joe Biden for the presidency.

Due to the coronavirus pandemic, journalists have not gotten as many chances to interview the Democratic nominee as they would in a normal year. But in the limited opportunities they have had — be they one-on-ones, tarmac scrums, or news conferences — very few tough questions have been asked of the man who’s currently a heavy favorite to be the next president. At times, the inquiries have been downright cringeworthy.

Most questions asked of Joe Biden are plagued with the same fatal flaw: They invoke Donald Trump. By their very nature, questions which reference Trump cannot help but prop up Biden — and they seem designed to do just that.

More troubling still, all too many of the Trump-focused questions are framed in one of these two ways:

The first category is bad. The second is horrendous. In this campaign, we’ve seen far too much of both.

It’s easy to ignore Donald Trump’s whining about the media given that it is constant, contrived, and almost always off-base. But when it comes to the treatment of his opponent, the president — for once — has a legitimate beef. One session in particular, a Biden news conference on Sept. 4, drew Trump’s ire.

“Take a look at those questions that they asked him,” he said. “They were not meant for a grown-up, they were meant for a child.”

A review of the transcript reveals these softballs:

“This morning in reference to that article in The Atlantic, in a call convened by your campaign, Khizr Khan said that the comments demonstrated that President Trump’s life is a testament to selfishness, and that his soul is that of a coward. You’ve talked about this as a different view of how you see the job as the president, but when you hear these remarks, ‘suckers,’ ‘losers,’ recoiling from amputees, what does it tell you about President Trump’s soul and the life he leads?”

“Last night, President Trump mocked you for wearing a mask and said that this is a sign that you must have some ‘big issues.’ He says this even though he knows that according to scientists and public health officials, wearing masks saves lives. I wonder if you worry that this kind of language that comes from the President of the United States could deter some Americans that are tuning into him to not wear masks.”

“Let me ask you about another thing the president said last night. He once again, suggested to his supporters that they should consider voting twice, if they’re in one of those states that can allow you to request an absentee ballot. So you fill that out and then go try voting again in person. State officials have said it’s a felony in some cases. Just curious what you make of it.”

“You said today is the angriest you’ve been as a presidential candidate. But you said you’re trying to restrain yourself. There are a lot of people out there who are supporting you or inclined to not vote for the president, who would say, ‘Why isn’t Joe Biden angrier about all of this?'”

Inquiries of that sort have, sadly, proved the rule rather than the exception during this campaign. Questions like those are complete layups for Biden. They are the types of questions asked by OAN conspiracy monger Chanel Rion in the White House briefing room. They are a waste of time.

Softball questions are not only a disservice to the electorate. They are also a disservice to the candidate. The media is treating Joe Biden not as a 47-year political veteran, but as a cartoonish foil otherwise known as Joe Not Trump. This hardly seems a way to get the American people to view Joe Biden as a commanding leader, if and when he takes office. Kid gloves treatment from the media might help Biden win, but it won’t help him govern.

Some journalists readily acknowledge, and defend, a double standard of media coverage for the two candidates. In the Reliable Sources newsletter on Sept. 17, CNN’s Oliver Darcy argued the coverage of Biden should not take on the same tenor as the coverage of Trump.

“The notion that Trump should be interviewed in the same fashion as Biden is absurd,” Darcy wrote. “Trump has no allegiance to the truth and it shows every single time he is in front of a camera. He lies, misleads, and promotes conspiracy theories at an unprecedented rate in modern American politics. That is why the news coverage of him is more aggressive than it is with Biden.”

Darcy is, of course, 100 percent correct in his assessment of President Trump. Yet that should have absolutely nothing to do with the level of press scrutiny applied to Biden. He’s applying for the most powerful job in the world. It’s on the media to make sure he’s up for it. That duty demands that the toughest possible questions be asked at every opportunity.

Where, for example, are the questions about Biden cozying up to the lecherous credit card companies which have sucked the lifeblood out of America’s working class? (Check your bill. There’s a reason it comes from Delaware.) Where are the questions about a foreign policy record that includes voting for the Iraq War and having reservations about the raid which took out Osama bin Laden? A record so spotty that it moved former President Barack Obama’s own defense secretary to say Biden has been wrong on nearly every major foreign policy issue for four decades.

Such probing queries are incredibly scarce. Instead, we get — What do you think of Trump’s soul?

The media must not measure Joe Biden against Donald Trump. They must measure him against the job. The standard for becoming President of the United States needs to be higher — much higher — than not being Donald Trump. Because if not being Trump is where we set the bar, we’re all but certain to get many more Trumps.

It was actually the candidate’s wife who, unintentionally, captured this dynamic the best. In a Sept. 27 interview on CNN, Dr. Jill Biden promptly shut down anchor Jake Tapper’s question about her husband’s penchant for gaffes.

“I can’t even say the word gaffe?” Tapper asked.

Her comments reflect the thinking of the Biden camp, the feeling that all they have to do is show that their guy is simply less objectionable than that other guy. And that’s fine. It’s the Biden team’s job to make the choice binary.

The media, though, must no longer be complicit. Because if they continue to accede to the Trump vs. Biden framework, then Joe Biden will have been proven right. And reporters will, indeed, get only the answers that they deserve.