WATCH: Pete Doocy Wasn’t Even Close to the Worst Reporter at Psaki’s Last Briefing — And the Stupid Will Doom Us All 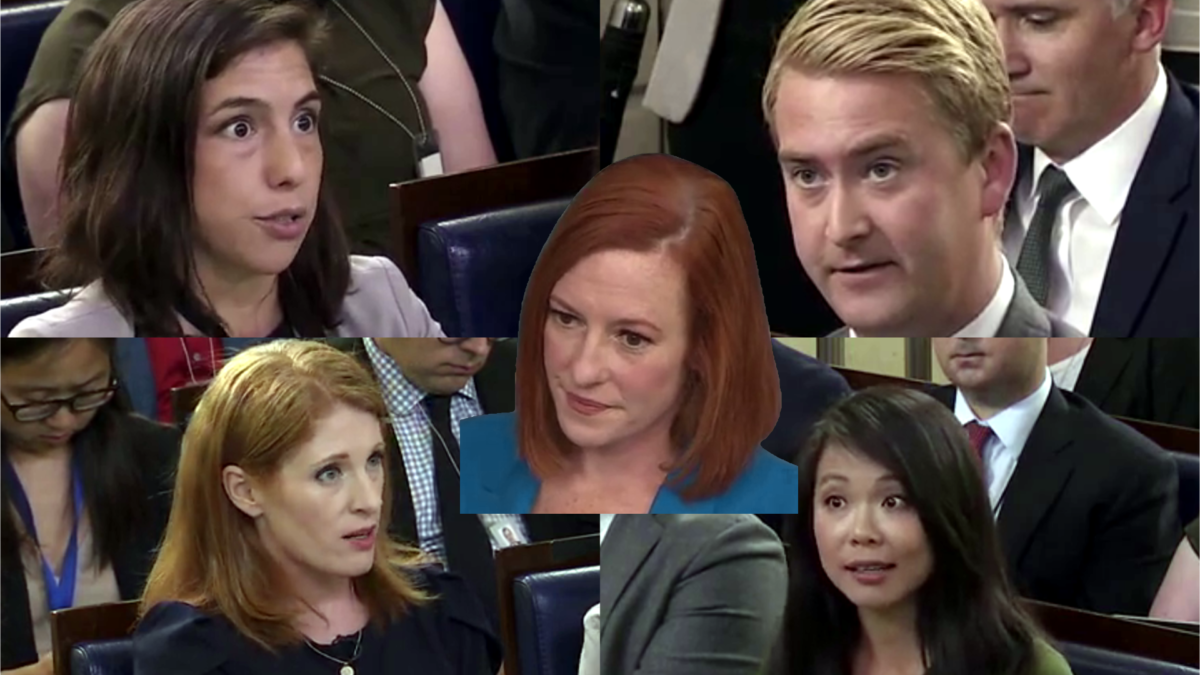 White House reporters put on an infuriating display of stupidity as they quizzed Press Secretary Jen Psaki about the CDC’s new mask guidance — and Fox News gadfly Peter Doocy was far down the list of offenders.

That’s not to say Doocy wasn’t awful as well — he definitely was. And his sins were similar to those of his colleagues. He began by asking Psaki why President Joe Biden said that “if you’ve been fully vaccinated, you no longer need to wear a mask” in May,  “if it was possible that that was going to turn out not to be true?”

That’s a bit like asking why Biden said “Good morning” if it was possible that it might someday not be morning. An idiotic premise, made all the more idiotic by the fact that the president said, seconds later (emphasis mine) “for now, after a year of hard work and so much sacrifice, the rule is very simple: Get vaccinated or wear a mask until you do.  It’s vaxxed or masked.  Get vaccinated.”

Asking why vaccinated people need to wear masks is a very good and fair question, but repeatedly implying that the new guidance suggests the vaccines don’t work is very harmful and stupid.

Doocy’s well-documented and obvious bad faith (you can sometimes feel him inwardly rolling his own eyes) and the unconvinceability of his audience mitigate the harm somewhat, but even apples-to-apples, his wasn’t the dumbest or most harmful set of questions. And the harm is multiplied when they come from ostensibly more “credible” news outlets.

The Associated Press’ Alexandra Jaffe was the first of many reporters — including Doocy — who treated the revision of the guidance as a political “Gotcha!” along the lines of “I was before it before I was against it.”

She told Psaki “on July 4th, the President gave his, sort of, ‘independence from the virus’ speech. He declared, quote, ‘We are closer than ever to declaring our independence from a deadly virus’ and, quote, ‘we’ve gained the upper hand on the virus’,” then asked “Was that declaring premature victory? And are you at all concerned that those statements will make it tougher for you guys to implement this revised guidance now?”

Psaki delivered a lengthy response that included the obvious fact that things change, and that they’ve been saying all along that things can change, and “that we are still in the midst of a once-in-a-generation pandemic battling an ever-evolving virus.”

“With respect to the President’s comments, though, do you, in retrospect, regret those comments?” Jaffe followed up, adding “Do you think that that was wise at the time, considering, you know, they could make it tougher for Americans to take this seriously?”

Psaki responded by reminding Jaffe of what else President Biden said in July, which all turned out to be 100 percent true and accurate (emphasis mine):

Today, we’re closer than ever to declaring our independence from a deadly virus. That’s not to say the battle against COVID-19 is over. We’ve got a lot more work to do.

Back then, we had the power of an idea on our side. Today, we have the power of science. Thanks to our heroic vaccine effort, we’ve gained the upper hand against this virus. We can live our lives, our kids can go back to school, our economy is roaring back.

Don’t get me wrong, COVID-19 is — has not been vanquished. We all know powerful variants have emerged, like the Delta variant, but the best defense against these variants is to get vaccinated.

My fellow Americans, it’s the most patriotic thing you can do. So, please, if you haven’t gotten vaccinated, do it — do it now for yourself, for your loved ones, for your community, and for your country.

You know, that’s how we’re going to stay ahead of these variants and protect the hard-won progress we’ve made. We never again want to be where we were a year ago today.

Jaffe knew full well what Biden said in July, but chose instead to try and concoct a “Mission: Accomplished” narrative out of God-knows-what impulse; it hardly matters. The effect is to mislead the public into distrusting the scientific guidance. And even Doocy didn’t have the cojones to try and get Psaki to apologize on the president’s behalf.

Jaffe wasn’t the only one to do so. CBS News’ Weijia Jiang took a shot, as well. Referencing the same May remarks that Dooocy did, she told Psaki that “the President’s message was get vaxxed or masked, and now it’s get vaxxed and masked, in some cases,” and asked “does he regret sending the message that it was a binary choice there?”

After Psaki delivered the obvious and simple answer that May was before the Delta variant exploded, Jiang explicitly invited Americans to distrust the public health guidance by asking “what is your message to Americans who are feeling whiplash right now?  Why should they trust the same group of health officials who, just two months ago, told them they don’t have to wear a mask anymore inside?”

Somehow Psaki managed to keep her shit together and not scream “BECAUSE THE ANTI-VAXXERS MADE DELTA EXPLODE AND THEY SHOULD STOP DOING THAT! THINGS CHANGE, EXACTLY LIKE WE SAID THEY WOULD!”

But the idiocy wasn’t over yet. Speaking for dumbshits eveerywhere, ABC News’ Karen Travers asked “how concerned is the White House that the message that unvaccinated Americans will hear after this afternoon is that, even if you’re vaccinated, you now have to wear a mask in some settings, and then just say, ‘why bother then’ on the vaccine?”

Psaki gave probably her best response of the briefing here by sarcastically noting “Well, here’s the good news: We’re all here. You all are all here.  You’ve got millions of people and Americans who watch your broadcasts and watch your shows and listen to you to hear what they should know about how to protect themselves and save their lives.”

IOW: Do your job, KAREN! (Not that kind of Karen, literal Karen.)

There were also several other reporters who questioned the effect of the new guidance on “messaging,” as if a. they have nothing to do with it and b. the people who are rejecting Covid vaccines while they’re in the hospital with Covid are poring over changes to CDC guidance in order to make decisions, yet simultansously misunderstanding the guidance.

But here’s the really infuriating part: these are the same people who spent months badgering the Biden administration about letting up on the mask guidance to encourage people to get vaccinated, suggesting — as Travers did yesterday — that eradicating a deadly virus is insuffient motivation to get vaccinated if people still have to wear masks for awhile. And if all of these maskholes had done what they were supposed to do to begin with, we wouldn’t be getting crushed by the Delta variant now.

This is not about some protective instinct over Biden and his administration. Although I understand their impulse to be “productive” and not insert themselves into mask and vaccine mandate discussions in an effort to avoid sparking even more resistance, I deeply disagree with it. The impulse is based on a faulty belief that these people can’t possibly be this stupid, and if they’re given enough space they will come around.

But they are this stupid, and they won’t come around, and everyone who wants to live through this and not have this same mask battle every year from now on should push for vaccine mandates.

And to be fair, there were a few reporters who did quiz Psaki about vaccine mandates, which Psaki says can’t be done nationally, at the federal level. And it looks like the White House is moving in the right direction, as Biden is set to announce a government-wide vaccine mandate on Thursday — hopefully with a recommendation that everyone else follow suit.

But every reporter who willfully tried to turn this issue into a dumb “Gotcha!” should be ashamed of themselves. Stupidity has shown itself to be a powerful enough force during this pandemic that it surely doesn’t need their help — especially when so many lives are on the line.