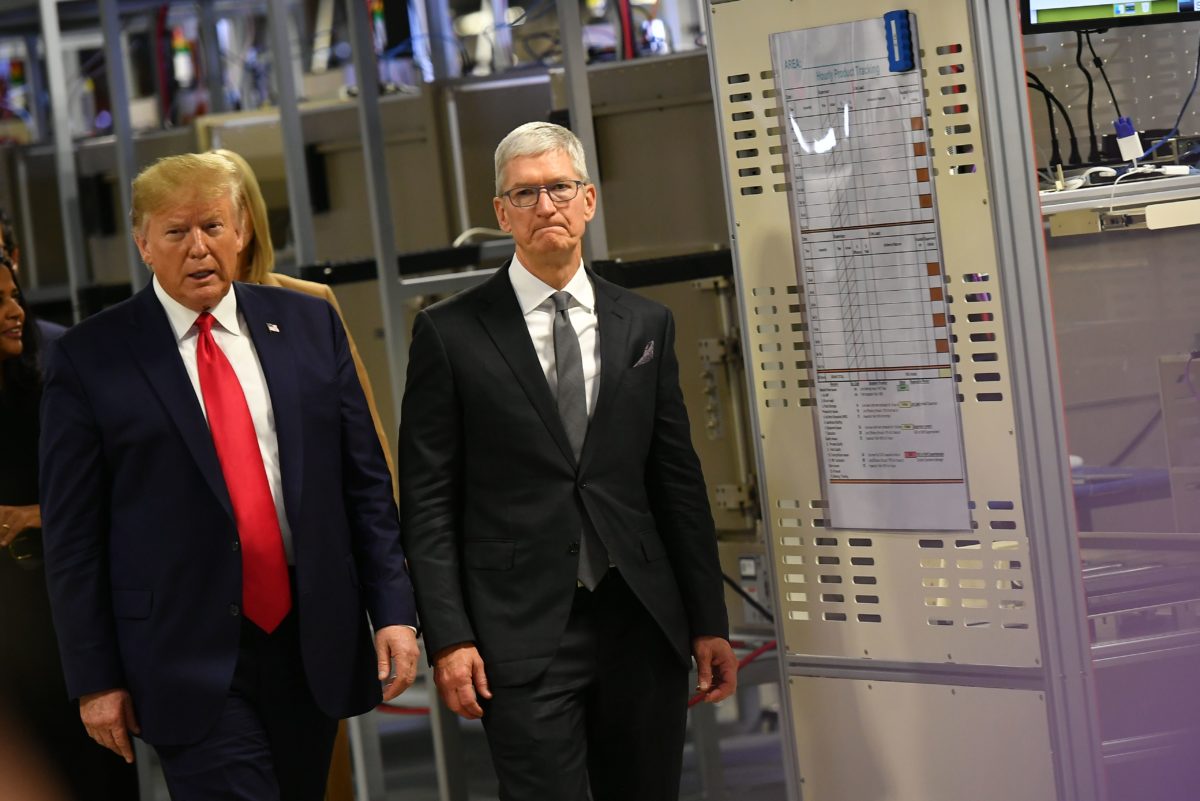 Journalists called out Apple CEO Tim Cook this week for failing to correct President Donald Trump’s claims that he had just opened a factory which has been making Apple computers since 2013.

President Trump just toured a Texas plant that has been making Apple computers since 2013 and took credit for it, suggesting the plant opened today. “Today is a very special day.”

Tim Cook spoke immediately after him and did not correct the record.

I don’t know why @tim_cook didn’t correct the president.

I do know that Apple assembles most of its products in China, making many potentially subject to tariffs.

I also know @tim_cook wants tariff waivers. When asked today about it, Mr. Trump said: “We’ll look into that.”

“It was a pretty typical publicity event, until the end. Mr. Trump walked in front of the news cameras and took credit for the plant, suggesting it had opened that day,” wrote Nicas in an article, noting that, “The plant has been making Apple computers since 2013.”

“Immediately after Mr. Trump’s comments, Mr. Cook thanked the president and his staff,” Nicas reported. “He did not correct the record.”

“The moment was part of a bizarre afternoon in Texas, where the president played up a six-year-old factory as evidence of his three-year-old presidency’s success in bringing manufacturing jobs back to the United States,” Nicas claimed. “It showed Mr. Trump’s willingness to leverage his influence over American companies in his pitch to voters that he deserves another four years in the White House. And it illustrated the complicated position that Mr. Cook and other corporate executives find themselves in with this president, forced to stand silently by while he sometimes misleads about their businesses.”

This is completely false. I get that @tim_cook did not correct the Tim Apple thing (pointing out someone being addled is awkward), but this is different. It’s a plant run by a company called Flex that has been manifacturing since 2013. If Apple is not going to say so, I will. https://t.co/3pJSm9VksF

The plant opened in 2013 and Tim Cook spoke right after him and didn’t correct him because the whole world has somehow decided that it is of the utmost importance to just let him lie as much as he wants because when you call him on it he throws a tantrum and I’m SO EXHAUSTED https://t.co/sbzg2wUjTU

Vox also took aim at Cook in an article on Thursday.

“Remember Tim Apple — the alter ego Trump created for the Apple CEO earlier this year? Well, he’s struck again. And he’s letting the president blatantly lie about the goings-on at his company in order to use Apple as a marketing tool for his presidency,” wrote Vox’s Emily Stewart. “You could argue that Cook wasn’t quite sure that the president was saying the plant had just opened… But later in the day, it became abundantly clear that Trump was, in fact, making up a plant opening — and Apple still isn’t saying a word about it.”

“It’s not new for Trump to lie; he does it a lot,” she continued. “But for one of the most valuable companies in the world to allow itself to be used as part of a false marketing campaign from the president of the United States is, to put it lightly, not great.”

Bill Kristol, the former founder and editor of The Weekly Standard, criticized Cook’s appearance with Trump for a different reason, commenting, “I suppose it would be asking too much for Tim Cook simply to have politely stepped aside and away from the president when Trump turned their silly Apple promo event into a partisan attack on Democrats, an assault on the media, and lies about the weighty question of impeachment.”

I suppose it would be asking too much for Tim Cook simply to have politely stepped aside and away from the president when Trump turned their silly Apple promo event into a partisan attack on Democrats, an assault on the media, and lies about the weighty question of impeachment.

Hey @tim_cook if you despise polarization, then don’t participate in campaign events like today’s, and especially don’t go along with lies like Trump pretending that the long-running Flextronics factory toured today is a new Apple facility. Don’t be party to lies & propaganda. https://t.co/TIlvT3Ulb1