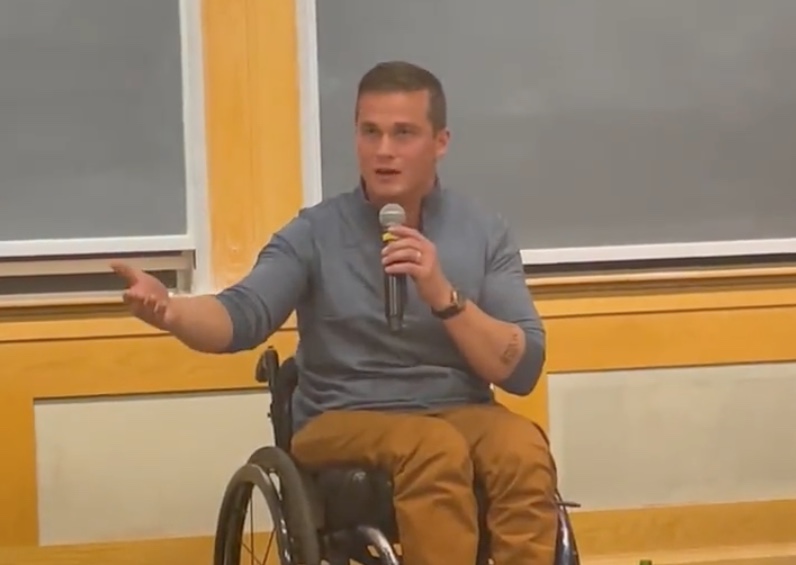 Republican lawmakers have struggled with former President Donald Trump’s false claim the 2020 election was stolen. Some have opted to dodge the question, conceding that Joe Biden is the current president but insisting there are “questions” about the way 2020 was carried out.

Others are flat out insisting it was stolen, despite all evidence. Rep. Madison Cawthorn (R-NC) is one of those lawmakers.

This week, a Dartmouth College student and activist asked Cawthorn during a town hall: “A majority of Republicans believe that President Biden was not lawfully elected. Now you know that he was and that he won the 2020 election. So when will you stop lying to your constituents, admit that Donald Trump lost and end this senseless attack on our democracy?”

Cawthorn replied by calling the election “unconstitutional.” He went on to explain:

So as you can all see in Article II, Section 3 of the Constitution, the only people who have a right to change election law in the United States of America, are the state legislatures. You saw in six key states, namely Wisconsin and Arizona, as the the worst perpetrators. The state governors and the Board of Elections there who actually went around the will of the state legislature and changed election laws on their own. That is unconstitutional. When you have voter drop boxes that are set up in parks when you didn’t give it a signature verification of voter identification laws. That is against the law and is an unconstitutional thing. Are you against the Constitution?

Mediaite reached out to Richard L. Hasen, a professor at the University of California, Irvine, School of Law who specializes in election law, to ask about Cawthorn’s claim the election was unconstitutional.

“It was not unconstitutional,” he said.

Those election laws were changed, of course, because of the Covid-19 pandemic, to allow Americans to vote more easily. Those changes, it should be noted, did not lead to the widespread voter fraud alleged by Trump: his attorney general, Bill Barr, said there was no evidence of widespread fraud.

What’s more, the Trump campaign did not lodge legal challenges against the changes until after he lost the election. Of the dozens of challenges the campaign made, all were thrown out of court, including by judges appointed by Trump.

I asked Madison Cawthorn why he won’t stop attacking our democracy.

He was upset. Here’s his response: pic.twitter.com/RgIc1pcf2A

This was not the first time Cawthorn claimed the election was stolen. “Because, you know, if our election systems continue to be rigged and continue to be stolen, then it’s going to lead to one place — and it’s bloodshed,” he said in August.