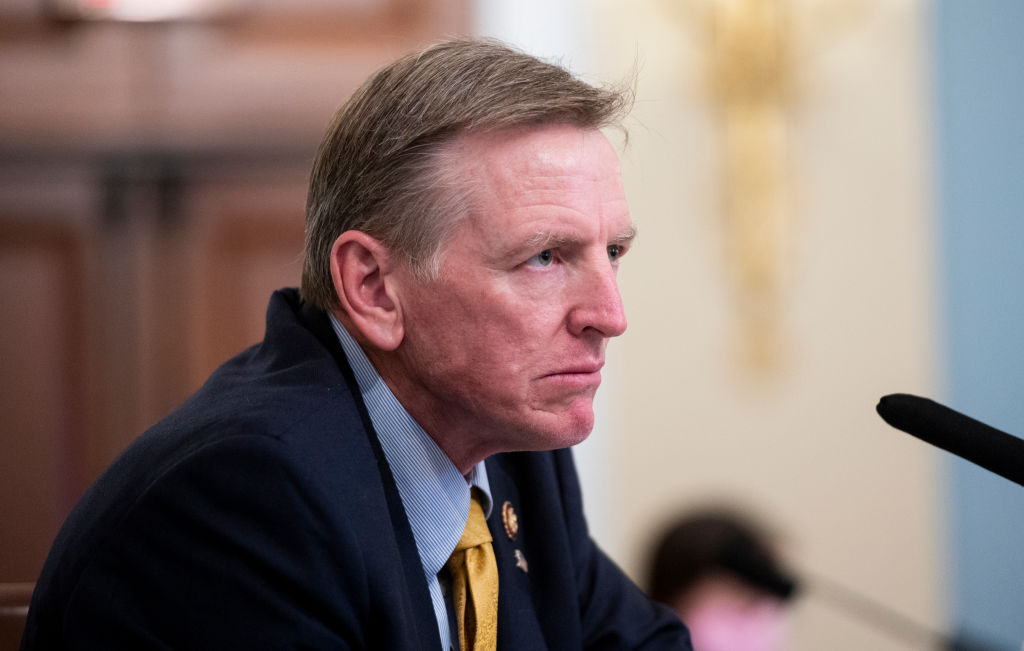 A Jan. 6 tweet by Rep. Paul Gosar (R-AZ) has resurfaced following the bombshell report that Republican members of Congress met with those planning the the January rallies in D.C. — with Gosar even promising them pardons.

According to Rolling Stone’s Hunter Walker, an organizer for the “Stop the Steal” rallies was promised a “blanket pardon” by Gosar as a token of appreciation for “all the hard work” they had been doing for the Trump team,

“Our impression was that it was a done deal,” the organizer told Rolling Stone, adding, “That he’d spoken to the president about it in the Oval … in a meeting about pardons and that our names came up. They were working on submitting the paperwork and getting members of the House Freedom Caucus to sign on as a show of support.”

Since the report was published, a January 6 tweet by Gosar is making the Twitter rounds again, many pundits noting that it further indicates complicity on the representative’s part.

Biden should concede. I want his concession on my desk tomorrow morning. Don’t make me come over there. #StopTheSteaI2021 @ali pic.twitter.com/E2kuoWPUVy

“Biden should concede,” Gosar wrote. “I want his concession on my desk tomorrow morning. Don’t make me come over there.”

The tweet also included the hashtag “StopTheSteal2021” and tagged the since permanently suspended account of Ali Alexander, a prominent “Stop the Steal” organizer.

Many talking heads are now questioning how the tweet has not been taken down yet, as Gosar, seriously or not, is threatening to “come over there” and force President Joe Biden to concede despite his election victory:

Wouldn’t this be considered proof? https://t.co/ZzMGf52IYC

Paul Gosar is an actual moron?

Imagine voting for this guy?

But the people of Arizona proudly voted for Rep. Paul Gosar. pic.twitter.com/uLjgESGtvW

Violence and the threat of violence to achieve a political end.

If that’s not terrorism, what is? https://t.co/KY7hFP4dbK

The story of Paul Gosar’s complicity in the January 6 insurrection should surprise nobody. His own family warned everybody about him: https://t.co/gqAUYF3kkV

I agree @ReallyAmerican1. That is why I’m running against this Traitor / Insurrectionist Paul Gosar. We cannot have these far-right extremists in Congress.https://t.co/Uu5s0JuQT7 https://t.co/GqQo78R0Uz

Paul Gosar betrayed his country and his oath of office. He should absolutely be removed from office immediately. Republicans are so invested in their treason they won’t act. It’s despicable. https://t.co/1vTT8EHiMB

The story of Paul Gosar’s complicity in the January 6 insurrection should surprise nobody. His own family warned everybody about him: https://t.co/gqAUYF3kkV

January 6 was an inside job.

This is not the first time Gosar’s tweet has resurfaced, as pundits on Twitter have been pointing to it as proof of his complicity in the insurrection since January 2021:

The fact that this is still up tells me what a traitor you are. People died when your frothing mob attacked our Capitol. You must face justice for your lies.

how does the committee not call Reps. Gosar, Biggs, and Brooks to testify over their communication with Stop the Steal fraudsters like Ali Alexander?

how is this person still in congress https://t.co/1HHn4XpmLH

“Don’t make me come over there,” Rep. Gosar tweeted as an armed and organized mob was amassing outside the Capitol. Given Ali Alexander’s claims to have conspired with Gosar, I’d sure like to know what Gosar knew and when he knew it. https://t.co/mFsXE2QS0u

How is this not a threat? And tagging one of the guys that admits to planning the riots/insurrection? C’MON. Remove him from office NOW. https://t.co/Dla5A1aI8w

It’s a shame we could not have a serious bi-partisan inquiry into what happened on January 6th.

What an embarrassing day in American history. Still cannot believe the role that some elected leaders played. https://t.co/tbMDPlzbqZ