Trump Tells Crowd Covid 'Disappearing' Week After He Had It

Speaking to a rally crowd on the South Lawn of the White House on Saturday, President Donald Trump said that Covid-19 is “going to disappear” and that it “is disappearing.”

“I want you to know our nation is going to defeat this terrible China virus, as we call it,” said President Trump from the balcony overlooking the south Lawn. “We’re producing powerful therapies and drugs and we’re healing the sick and we’re going to recover.”

Friday saw the highest daily increase in new cases in the United States since mid-September, according to data from Johns Hopkins, with over 57,000 new infections and a thousand deaths. It was the first time since August that new cases topped 50k for three consecutive days, so a sharp increase in the country rather than a decline.

“Through the power of the American – the American spirit, I think, more than anything else – science, medicine will eradicate the China virus once and for all,” said Trump. “It’s going to disappear, it is disappearing.”

The president, along with First Lady Melania Trump, former counselor to the president Kellyanne Conway, former New Jersey governor Chris Christie, and several others were all diagnosed with the Covid-19 coronavirus in just the last week or so. Trump was moved to the Walter Reed Medical Center for treatment and only returned to the White House on Monday.

It is believed that outbreak was the result of another event held at the White House, the announcement of Amy Coney Barrett’s nomination to the Supreme Court.

Today’s White House event involved an even larger crowd, mostly organized by conservative activist Candace Owens’ group BLEXIT, as well as by the “Back the Blue” campaign. Attendees were told that they would not be allowed entry to the event unless they brought a mask with them, though ABC News reported that wearing the masks was not listed as a requirement. 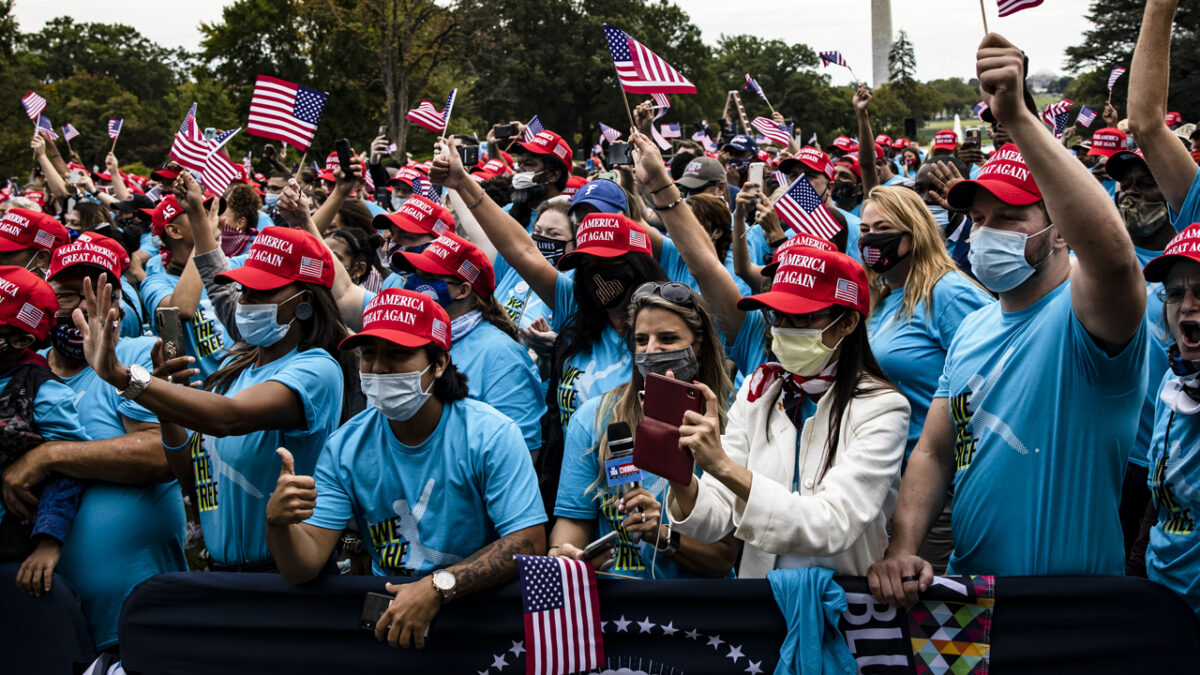 Photos and videos from the White House show most of the crowd were wearing masks before and during the president’s speech, although at the earlier portion of the BLEXIT event it was not as widespread.