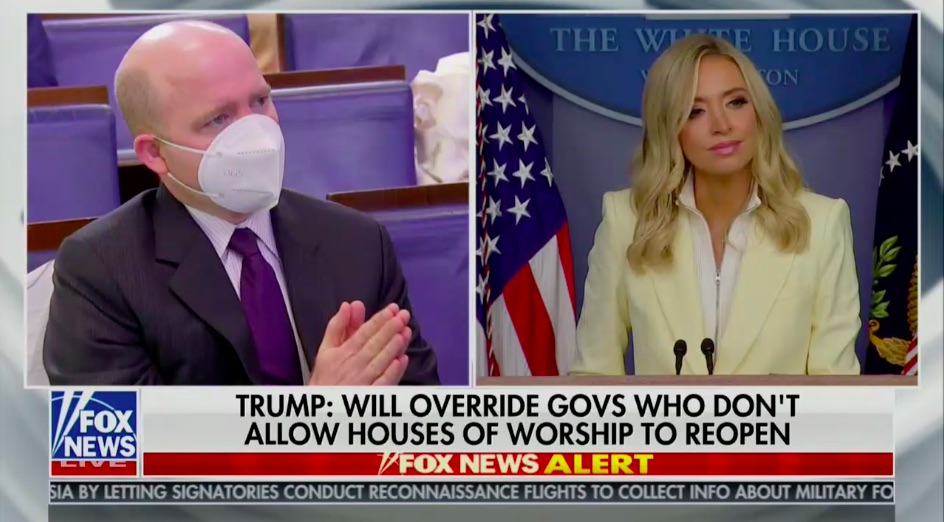 As near-daily White House press briefings have returned, so too have viewers begun to tune in when new Press Secretary Kayleigh McEnany conducts them — and the typically mid-afternoon events look like they could turn into a competitive ratings fight.

For example, on Friday, the contentious briefing, where McEnany baselessly implied that the White House press corps didn’t want churches reopening, ended up as a split decision in the 2:00 p.m. hour between Fox News and CNN in total viewers and those in the advertiser-coveted 25 – 54 age demographic, respectively. According to Nielsen Media Research, Fox News won overall viewers with 2.11 million, while CNN came in second with 1.34 million, and MSNBC trailed behind at 1.03 million. In the demo, however, Fox and CNN swapped positions, with the latter eking out a victory with 364,000 viewers over the former’s 357,000. MSNBC was far behind at 148,000.

Fox News reigned during primetime as well, scoring 2.82 million total viewers and 427,000 in the demo. In a surprise move, CNN fell to third in the demo, as MSNBC’s 308,000 viewers beat it by 6,000 viewers. This defeat came after CNN barely squeaked out a 1,000-viewer edge over MSNBC in the demo on Thursday night. In total viewers, MSNBC also won, but much more handily, 2.22 million to 1.30 million.

Leading primetime was Fox’s Tucker Carlson Tonight, which won all of cable news with 3.68 million overall and 544,000 viewers in the demo. Fox’s 9:00 p.m. show, Hannity was barely edged out by The Rachel Maddow Show both overall and in the demo, 2.69 million to 2.41 million and 376,000 to 375,000, respectively, even though the former was a rerun compiling the best of Sean Hannity’s interviews with President Donald Trump. CNN’s Cuomo Prime Time posted the best Friday ratings for that network, but it still trailed far behind at 9:00 p.m. with 1.43 million viewers in total and 319,000 in the demo.