A ‘Lost’ Ayn Rand Novel Has Been Discovered; It’s Based on an Ayn Rand Play

A ‘Lost’ Ayn Rand Novel Has Been Discovered; It’s Based on an Ayn Rand Play 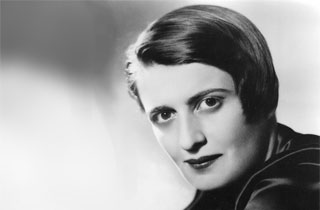 The Libertarian equivalent of the Dead Sea Scrolls just happened, guys: the Ayn Rand Institute announced today that they discovered a “lost Ayn Rand novel,” and not only will they publish it in July, they will also devote an entire seminar to the subject of Ayn Rand’s secret lost novel.

Okay, caveat: It’s not really a “lost novel,” but a novelization of Ayn Rand’s play Ideal, which was written in 1934 and was first staged in 2010 off-Broadway.

If rabid Objectivists want any more reason to rejoice over this book, the liberal moocher elite at the New York Times already panned the play, saying that “the show’s clumsy mix of long bursts of theory and a laborious plot would test the endurance of even Alan Greenspan, a famous Rand admirer and veteran of long, boring meetings.” (Then again, the New York Post also called the play “a stinker that well deserves its obscurity,” so we’re not sure who’s behind the collectivist plot to discredit Ayn Rand.)

And via the Times, here’s the plot of the play (we’re sure that the novelization has at least eight more handsome captains of industry):

On the run after being accused of murder, Kay Gonda, a glamorous movie star played with a lopsided grin and a hard-boiled pluck by Jessie Barr, visits six fans in the hopes of finding a place to hide. The diverse group includes a bitter, impoverished socialist (Andrew Young), a naïve priest (Lee Kasper) and a humble, sad-eyed husband (Ted Caine). Many are weak men struggling against the demands of duty voiced by a series of shrill women who pale next to the mysterious Gonda, who is turned away each time.

Surprisingly, there are no rapes (the play’s director told the WSJ that the Randian heroine “laughs at the man who attempts to rape her”) and only one bitter socialist. But there are 33 roles for at least a dozen actors, which makes the play nearly impossible to stage for sheer money purposes, and also the lines sound like this:

“My dear, why waste one’s emotional reserves in blaming oneself for what is the irrevocable result of an inadequate social system?” or “Of what account is an art that preaches things it does not want to exist?”

Maybe the book version will be better? The Ayn Rand Institute seems to think so. “How often does one get to announce the new publication of a novel by such an influential author eighty years after the book was written?” ARI executive director Yaron Brook said in a press release. “It’s incredible to see that several decades after Rand’s death, her work and ideas are still fresh and alive in the culture.”