An Open Letter to Wired Magazine

An Open Letter to Wired Magazine 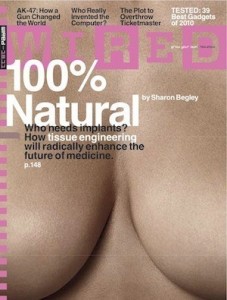 I feel like I’m in an abusive relationship with you. I love you. You’re charming, attractive and smart, everything I could ever want in a magazine. My heart skips a beat when I see a new issue in my mailbox. Most of the time, you’re harmless, and I tell everyone I know how awesome you are. But every now and then, you slip, and you make me feel very bad, make me question my judgment.

When I noticed this month’s issue in my mailbox, I approached it with the same breathless anticipation that I do every month. I didn’t even mind the naked picture of Jennifer Aniston on the GQ subscription insert. I mean, it’s just advertising. You’ve got to make a living, right? Then, I turned you over to see what fascinating topics I would be delighted by this month. Boobs. Right there on the cover. A pair of breasts, no head, no rest of body… just boobs. Sure it accompanied a story on tissue re-engineering, so what other possible way might you visually represent that, but with a pair of breasts? No other possible way?

This isn’t the first time. We’ve been through this before. Your covers aren’t all that friendly to women on a regular basis, and that makes me sad. There was naked Pam from The Office in 2008 (you thought you were so clever with that acetate overlay – I mean, how else would you depict transparency?). In 2003, you had the nice lady covered in synthetic diamonds. There were the sexy manga ladies and LonelyGirl15 and Julia Allison with their come-hither looks. And Uma Thurman, she’s a lady, and she was on the cover… But wait, that was for a character she was playing in a film based on a Philip K. Dick novel.

Come to think of it, the last time that a woman was featured on your cover, because she was being featured in the magazine for an actual accomplishment, was way back in 1996 when it was Sherry Turkle, the academic and author. And, the only other time was in 1994, when musician/author Laurie Anderson was featured. Because since then, I guess no women have done anything notable in technology unless it had to do with their bodies? Really? 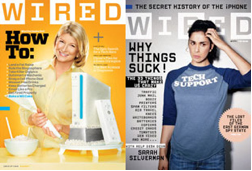 Martha Stewart in 2007 doesn’t count, and neither does Sarah Silverman in 2008, because those were both just jokey, thematic covers.

It’s not like we haven’t talked about this. In the 1996 bookWired Women: Gender and New Realities in Cyberspace by Lynn Cherny and Elizabeth Reba Weise, the author Paulina Borsook details the woman problem in Wired in “The Memoirs of a Token: An Aging Berkeley Feminist Examines Wired.” That was 14 years ago! In 2005, I met one of your female editors, Rebecca Hurd, at SXSW. We had a nice chat, and she politely said that if I had any ideas about women that should be featured in Wired, I should send them to her. I went to the Web to solicit some input, and subsequently sent her an 11-page document of women doing interesting things with technology. I don’t think one of those ideas came to fruition on the pages of Wired.

Things were looking up a couple months ago when you published that great article on Caterina Fake of Flickr and Hunch fame. That could have been a cover… Instead you went with Will Ferrell… If you don’t believe me, see for yourself. Go back through your covers over the years. How exactly are young women supposed to feel about their role in technology by looking at your magazine?

You can say that if I have a problem with your covers, then I probably shouldn’t read GQ, Esquire, Vanity Fair, Cosmo, Glamour or Rolling Stone or just about any other magazine on the planet. Well, I don’t read those magazines, and I don’t recommend those publications to my students, many of whom are female, as an important source of technology knowledge regarding trends and culture. You’re better than this. You don’t need to treat women in this light to sell magazines. You have the power to influence the ways that women envision their roles with technology. Instead, you’re not helping. Like Jon Stewart said (stealing his quote criticizing the now defunct TV show Crossfire), “You’re hurting America.”

So, I’m breaking up with you. As much as it pains me, really, deeply pains me, I can no longer stick around for this abuse. Had this been an isolated incident, a clever and provocative way to introduce an article, I might be able to forgive you and move on. But how many chances do I have to give you before you grow up? Or before I wise up? I’ve got the kids to think about…I’m doing this for them.

I still love you. I think I need you, and I’m not sure I can live without you. But you left me with no choice.

Update 11/11/10: Chris Anderson, Editor of Wired, has taken the time to respond to this post. See his comments and my response in the Comments section. Now, we have taken the conversation to email, in which he has graciously offered to listen to ideas for improving the coverage of women in Wired. I am encouraged by his prompt response and this offer. If you have any suggestions for ways in which women can be more favorably covered in the pages of Wired, feel free to leave a comment or send me an email clroyal [at] gmail.com. Let’s use this as an opportunity to influence positive change.

11/11/10: BTW, I am approving comments on this post to keep things civil. So for the record, so far, I have approved all comments except for three, because of inappropriate language (like really mean name calling) or overt stupidity. It’s fine if you don’t agree with me, but I won’t be responding to most individual points. I appreciate the discourse that has been created around this topic.

And, one final point of clarification. By “breaking up” with Wired, my intent was to not renew my subscription and severely curtail my enthusiastic endorsement of Wired to students and others who attend presentations or just ask in general. Sometimes I describe my love/hate relationship with Wired to students, and I shouldn’t have to do that. When you describe a relationship with a person as love/hate, it is typically dysfunctional, and I have no room for that in my life.

Cindy Royal is an an assistant professor at Texas State University in San Marcos, teaching Web Design, Multimedia Journalism, and other courses that integrate tech skills and concepts. Visit her Web site at www.cindyroyal.com or find her on Twitter at www.twitter.com/cindyroyal. This post was reprinted with permission from an earlier version posted to her blog.