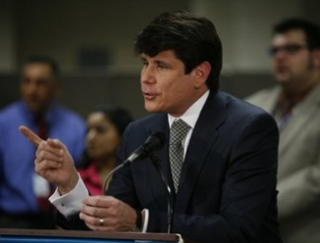 You can’t please everyone: nearly two years after former Illinois governor Rod Blagojevich became the face of disgraceful political mischief worldwide, the ethics lecturer and warrior poet has become so predictable and trite that even Chicago media– who actually have to deal with the circumstances of his governorship, are bored with his current trial.

The Chicago Sun-Times ran an editorial yesterday not decrying Blagojevich’s corrupt behavior, or his attorneys’ insistence on being disruptive and unhelpful, but on how boring the entire operation had become. While columnist Denise Crosby admits she isn’t a “fan of reruns,” she argues that this second trial is even more difficult to care about than the typical repeat. “Like any second-rate circus act,” she notes, “the novelty has worn off.” Noting the lack of “drama” and “surprises” (despite, once again, the usual threats to hold Blagojevich’s lawyers in contempt), Crosby called various relevant individuals in the area to see if her apathy was unique, and found that most people’s reaction to the fact that this trial was happening was something like “it’s lost its luster” or “there’s more important things out there.”

The Chicago Tribune, from which Blagojevich allegedly tried to have a critic removed, seem a little less overcome by ennui, but the pattern remains: Illinois is just bored, and the nation has forgotten to care, opting instead to follow shiny objects like “violent rappers” and Osama bin Laden‘s extensive porn collection. Part of this, of course, is Blagojevich himself– with jailtime at stake, the larger-than-life corruptocrat has kept the poetry recitals and Elvis impersonations at a minimum. Part of it is the jaded nature of corruption-saturated regions; Blagojevich is about as important to Illinois residents as, say, the fact that former governor Jim McGreevey was rejected from the Episcopal church for “being a jackass” is to New Jersey residents. In areas like Illinois, where three governors have gone to jail in as many decades, it takes a little more than a few f-bombs and kickbacks to say in the news. And if Illinois doesn’t care, the rest of the country is simply not going to bother.

That’s not to say that the Blagojevich trial is as boring as the Sun-Times makes it out to be. In fact, for the scholar of such things, it’s rather fascinating, and the fact that one of its major players, former White House Chief of Staff Rahm Emanuel, is being inaugurated as mayor of Chicago today only helps add to the color. This week, prosecutors played tapes of a profanity-laced rant to former deputy governor Robert Greenlee that demonstrated that, even if President Obama did attempt to give Blagojevich his two cents on who should succeed him, Blagojevich was having none of it:

“Get the f— outta here, Greenlee. I’ll f—— fire you,” Blagojevich snaps. “She’s got no f——chance. I’m gonna f—— take hits in the black community for Durbin and f—— Harry Reid and Rahm, f— them and [David] Axelrod.”

In court, Greenlee said he took the threat seriously.

So, yes, Blagojevich is being pitted against the President who just killed bin Laden, one of his major senior advisers, and the mayor of Chicago in this transcript. It may not be topical material, but it certainly is fun. But ultimately, being interesting in its own sake is not enough to sustain a news story within the cycle, especially in when stories last for years in a 24-hour news cycles– novelty is its own reward, and those eagerly waiting for more of it must hope Blagojevich and his team are saving the best for the day of the verdict.