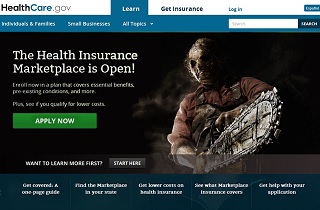 Television news programs featuring people who think Obamacare is a financial disaster for them, only to find out that they’ll actually be paying less for better coverage, have become something of a drinking game for the reporters who clean up after them. You can throw one more on the pile today, as Deborah Cavallaro, the CNBC guest who asked Maria Bartiromo to explain how her old plan is substandard, when “I’d be paying more for the exchange plans than I am currently paying by a wide margin,” gets an answer from The LA Times‘ Michael Hiltzik.

Cavallaro appeared on Wednesday’s Closing Bell to provide her reaction to President Obama‘s speech, and she was not pleased. “Unfortunately, the President did not stay one single thing just now that makes me feel any more confident that I am going to be able to afford the plan, or that the plan is going to be any better,” she told Bartiromo, and added that “Ii’d be paying more for the exchange plans than I am currently paying by a wide margin.”

She also told Bartiromo that “I am currently paying $293 a month, and under Obamacare, it’s any place from $478 to $500 a month for a quote, comparable plan to what I have.”

As has often been the case with these stories, Bartiromo didn’t dig any deeper, or ask any of the questions necessary to check Cavallaro’s story out, but luckily, The LA Times‘ Michael Hiltzik was on the case. Long story short, he determined that based on her income, Cavallaro could get a cheaper plan than she has now ($256 /mo.), with better coverage. Hiltzik does note that it’s possible some of the doctors Cavallaro uses might not be on the same plan (which she told Bartiromo is important to her), but that’s tough to check without knowing who those doctors and hospitals are. Both plans are from Anthem Blue Cross, though, so chances are there is significant overlap. Hiltzik goes into great detail about her benefits, and several other options available to her, and it’s worth a thorough read.

The bottom line is that Cavallaro’s assertion that “there’s nothing affordable about the Affordable Care Act,” as she put it Tuesday on NBC Channel 4, is the product of her own misunderstandings, abetted by a passel of uninformed and incurious news reporters.

…When she told Channel 4 that “for the first time in my whole life, I will be without insurance,” it’s hard to understand what she was talking about. (Channel 4 didn’t ask.) Better plans than she has now are available for her to purchase today, some of them for less money.

The sad truth is that Cavallaro has been very poorly served by the health insurance industry and the news media. It seems that Anthem didn’t adequately explain her options for 2014 when it disclosed that her current plan is being canceled. If her insurance brokers told her what she says they did, they failed her. And the reporters who interviewed her without getting all the facts produced inexcusably shoddy work — from Maria Bartiromo on down. They not only did her a disservice, but failed the rest of us too.

Television news, the medium with the widest audience, has yet to get one of these stories right, and online media so far has best-selling author David Frum. Maybe TV news reporters should just take to reading The LA Times on air.