Apparently The FBI Didn’t Know Who Walter Cronkite Was

Apparently The FBI Didn’t Know Who Walter Cronkite Was 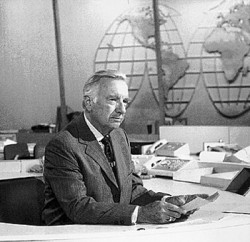 When Walter Cronkite passed away in June his FBI records became available to the public. Considering the uber-paranoid J. Edgar Hoover was still in charge of the FBI until 1972, and keeping in mind the powerful position Cronkite occupied in the American mind, his access political figures, and particularly his opposition to the Vietnam war in 1968, it’s not hard to imagine that the FBI would have kept some sort of eye on Cronkite’s doings over the years. Who knows what juicy tidbits those files might have uncovered! (Remember when the CIA released all those documents and it was revealed that Julia Child was spy?)

Actually we will never know because some enterprising soul at the FBI opted to destroy the files two years ago under some policy the FBI has, that only calls for them to keep records of historically important persons.

The FBI should have preserved records about Cronkite, who anchored CBS’ newscasts from 1962 to 1981, said Scott Hodes, a former top lawyer in the FBI’s records office. All FBI records on such a prominent person should have been saved under the FBI’s policies, Hodes said.

“You’re not supposed to destroy records that are historically valuable,” Hodes said. “Somebody should have known who Walter Cronkite was.”

Yes they should! And the fact that they didn’t is not only depressing — if Cronkite can be lost to history’s bad memory what chance does this generation have — it makes one wonder what other files are being fed to the paper shredder by some underling who didn’t pay attention in their American History class. Also? Aren’t we able to digitize this stuff yet?