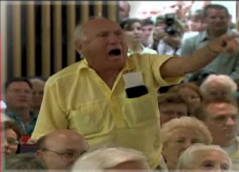 Pretty much the only topic President Barack Obama has wanted to discuss in his summer media saturation tour is his health care reform plan. Alas, it frequently seems to be the last thing the cablers covering him prefer to focus on. Health care is complicated and wonky and not at all ideal for the confrontational soundbites that the bread and butter of cable news. Hence the summer thus far — the first since 2006 that isn’t dominated by presidential campaign coverage — has brought us the Birthers and Gates-Gate, and just this week the heroic return of Bill Clinton and the freed journalists. However health care appears to be making a cable comeback in the form of some recent contentious town hall meetings.

Yesterday’s raucous gathering in Tampa Florida is dominating headlines today (video below) and earlier this week Arlen Specter and Kathleen Sebelius made unintended news when they were shouted down at a town meeting in Philadelphia. Nothing like a good shout-fest to get everyone on the same meme.

But is this good or bad news for Obama? Joan Walsh says the meetings are merely “display of hysteria fed by lies peddled by GOP leaders and corporate interests.” Paul Krugman, meanwhile speculates that “for the most part, the protesters appear to be genuinely angry.” In her column this week Peggy Noonan says these increasingly rebellious meetings are merely a measure of how badly Obama misjudged the mood of the country by choosing to push health care through now.

They overinterpreted the meaning of the 2008 election, and didn’t fully take into account how the great recession changed the national mood and atmosphere…And so the shock on the faces of Congressmen who’ve faced the grillings back home. And really, their shock is the first thing you see in the videos. They had no idea how people were feeling.

Shock and awe! Not two words necessarily associated with the complicated thousand-page long health care plan currently winding its way through Congress but definitely words people in charge of cable news love to hear. And there is perhaps the argument to be made that crazy coverage is better than none at all. If these town hall meetings keep up — and one suspects they will — they are sure to dominate the dog days of August news cycle. If only Obama, or the Dems, can figure out an equally explosive way to explain themselves in light of all these headlines they’d have the sort of saturation coverage they’ve been after these last few months and perhaps make some progress.