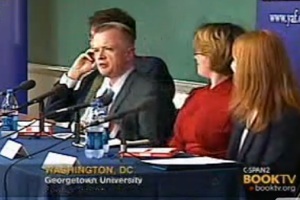 This is the sort of programming that could really get people to tune into CSPAN! During a BookTV discussion of Jonah Goldberg‘s latest book Proud to Be Right two of the panelists who had contributed essays to the tome got into an interesting back and forth. Todd Seavey and Helen Rittelmeyer used to date, and judging by Seavey’s comments, he’s still fairly bitter about the break-up. The Daily Caller described it as “the wonkiest, nerdiest Internet revenge ever.”

Seavey: “I think you’ll find a lot of Helen’s positions are guided by the desire to increase suffering.”

Seavey: “That might explain it. Although, you start connecting the dots and you realize that, though she sounds like an old-timey, old-fashioned Catholic moralist, she’s almost always defending something that most of us you find horrific, whether it’s corrupt politicians over reformers, bar brawlers. She’ll defend Catholic moralists one moment, but defend prostitutes and bad girls the next.

She says she’s sort of like a libertarian, but the first thing she wants to repeal, she once said, was the law against assault, so that men get into more fistfights or at least live under the threat of constant fistfights…

I probably should confess that Helen and I dated for two years, so we’ve sparred about many things. It might come as a surprise to some of you that we dated for two years, not just because we have ideological differences, but because there are probably some people in this room who also dated Helen during those two years, given how tumultuous it got. It was sort of on again, off again.

Rittelmeyer: “I’m in favor of combativeness.”
Seavey: “And, at at times her gamesmanship would include even coldly saying that she was gonna play matchmaker and set up a couple and then seduce the man away to play with his mind and hurt the woman, which when you think about it is pretty creepy. Kinda disturbing.

Rittelmeyer: “Is all this going on CSPAN?”

Seavey: “I believe five months later, she made good on this somewhat disturbing promise.”