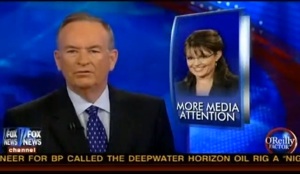 The Newsweek cover story this week is entitled “Sarah Palin: What Palin’s Appeal to Conservative Christian Women Says about Feminism and the Future of the Religious Right.” Last night, Bill O’Reilly asked if the piece was “a slam or compliment” and had on as guest Lisa Miller, the writer who penned the story, to discuss Sarah Palin and her unique impact on feminism.

If there was any question of how this interview would go, it was answered in the opening salvo when O’Reilly revealed that his fellow Fox News contributor Sarah Palin did not like the article (despite claims by Miller that she hadn’t seen it). But O’Reilly then proceeded to once again demonstrate a broader sensibility as he effectively praised the writer by disagreeing with Palin, saying “I don’t think it was a bad article…it’s not a slam.’ Faint praise? Yes, but praise nonetheless.

O’Reilly then proceeded to present passages from the article that he found to be “dubious,” most notably questioning Miller’s accusation that Palin has antagonized women on the left for describing herself as a feminist. A rough and partial transcript from the interview follows:

O’Reilly: There are a couple passages that are dubious. I will read them to you. Your own words and you can tell me what you had in mind subject is feminism. Quoting:

“Palin has been antagonizing women on the left of late describing herself as a feminist. Righteous momma bear anger that wells up when one of her children is attacked in the press or her values are brought into question.”

Why would she be antagonizing women on the left by using the word feminist? Why?

Miller: Well, because old school traditional feminist think there is a certain agenda that goes along with Feminism.

O’Reilly: But there isn’t.

Miller: They say there is.

O’Reilly: You buy that?

Miller: And she doesn’t comply with that. she is calling herself a Feminist. It doesn’t jive with the that traditional definition of Feminism.

O’Reilly: You are using the word traditional. “They” being far-left militant feminists. They say own the word. I don’t believe that there are a lot of Feminists in the conservative ranks. but your magazine and you has been antagonizing women on the left by describing yourself as a Feminist. Sarah Palin is absolutely has the right to describe herself as anything she wants.

Miller: I completely agree with you, actually.

O’Reilly: Why didn’t you say that.

Miller: Antagonizing women on the left and she has been.

O’Reilly: Just by saying she is a Feminist antagonizing somebody?

Miller: Right. I’m just reporting being what i see. And so she is not antagonizing me.

O’Reilly: That’s good to hear. I don’t think she is antagonizing anybody. I think takes it that way.

Miller: I agree. People who call themselves Feminist —

“The women who follow Palin will fight against Roe v. Wade and support adoption and health clinics they are, you know, used on birth control and gender discrimination. They shrug at the agonies of the over educated moms who feel forced to choose between work and family. None had to do that on the farm and they refute the idea that succeed in the world a woman must look and act like a man.”

See, again, you are coming at it from — I don’t know any conservative women who shrug at the agonies of over educated moms who feel forced to choose. I don’t know anybody who does that.

Miller: I think there is a very powerful — Sarah Palin is actually convey ago very powerful message, which is there is a lot of kind of whining on the fringes of the left. And she is saying, look, we don’t have to choose. we can be powerful working women and be wives and be mothers and take our children, you know, put our children first and make money and be visible in the world all at the same time. And I think that’s a message that a lot of women, especially conservative Christian women want to hear.

What’s fascinating in this exchange is that the curmudgeonly old traditionalist calls out the savvy young writer on the limitations of words – namely the claim that feminism is a simple and convenient label to be used to pigeon-hole Sarah Palin. In the canon of socio-political terminology, there are few words more complicated than “Feminism”; and for Miller to simply allege that Palin has vexed the left by appropriating a term that has as many meanings as there are books in the Women’s Studies Section of one’s local bookstore oversimplifies the underlying issue.

The interview finished in a mutually respectful manner after O’Reilly and Miler shared a reasonable and informative discussion. But its really a shame the the segment lasted only 4 and one half minutes, as the self-described traditionalist (O’Reilly) and the writer (who O’Reilly kind of nails as writing from “that urban doctrinaire left wing”) could intelligently and politely discuss their political differences in an entertaining way for much longer. Good stuff all around.

Edit. note – the post has been slightly amended for clarity since it was originally posted.