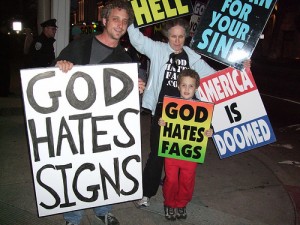 On the heels of the Arizona shooting that left six people – including a 9-year-old girl and a U.S. District Court judge – dead comes plans for a new bill that could effectively keep protesters from demonstrating during or near funerals and other such memorial services for the deceased.

According to AZDailySun.com, legislators from both the right and the left have gathered enough votes to deem it illegal to “picket within 300 feet of any home, cemetery, funeral home or house of worship before, during or immediately after a ceremony or burial.” The final vote will take place this afternoon with the hopes that Gov. Jan Brewer will be able to sign the measure by day’s end.

Well, the Westboro Baptist Church has announced its plan to picket the funerals of the six Arizona shooting victims because, apparently, God is raising the roof and dancing a festive jig now that Congresswoman Gabrielle Giffords is recuperating from a gunshot to the head and Judge John Roll lost his life. Or somesuch. The Church explains its mission succinctly:

Your federal judge is dead and your (fag-promoting, baby-killing, proud-sinner) Congresswoman fights for her life. God is avenging Himself on this rebellious house! WBC prays for your destruction–more shooters, more dead carcasses piling up, young, old, leader and commoner–all. Your doom is upon you!

Tasteless and drunk on attention as the Westboro Baptist Church can arguably be – and as upsetting as their intended protest may be for those mourning the victims – this proposed bill seems to tread rather close to infringing one’s right to assemble, although Arizona’s Sen. Paula Aboud, a Democrat, insists the measure won’t seek to regulate what people say, infringe upon one’s right to free speech, or bar protesters altogether, but will instead merely regulate “the time and the place in which they can do so.”