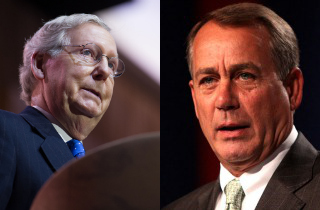 House Speaker John Boehner (R-OH) and Senate Majority Leader-in-waiting Mitch McConnell (R-KY) penned an op-ed in the Wall Street Journal Thursday morning outlining their priorities for the next few years. A big’un: repealing Obamacare. (The word “replace” does not appear in the op-ed.)

“Looking ahead to the next Congress, we will honor the voters’ trust by focusing, first, on jobs and the economy,” the pair wrote. “[This] means renewing our commitment to repeal ObamaCare, which is hurting the job market along with Americans’ health care.”

The House of Representatives has passed countless bills repealing the president’s signature law, though thus far they’ve been symbolic votes. Now that the GOP controls the Senate, they could challenge the president to veto a bill repealing the law.

However, while the law is overall unpopular, its individual provisions poll well, and many predict McConnell and Boehner to try to weaken it piecemeal.

Sure enough, the duo highlighted “a proposal to restore the traditional 40-hour definition of full-time employment, removing an arbitrary and destructive government barrier to more hours and better pay created by the Affordable Care Act of 2010.”

That’s a reference to the employer mandate portion of the Affordable Care Act, which requires companies of a certain size to provide health insurance to full time workers or pay fines. Critics say the provision will compel companies to force employees into part time work, while supporters say there’s little evidence to back up that fear.