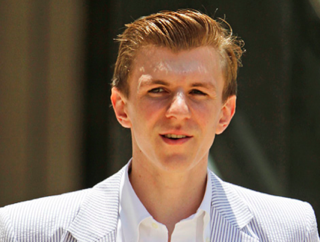 Undercover filmmaking personality James O’Keefe is perhaps defined by his aversion to the mainstream media, that bastion of liberal thought that shields the corruption his life’s work is dedicated to expose. So the New York Times isn’t the first place one would expect to find a glowing five-page look behind the scenes of his latest stunt, a Medicare hoax starring fake IRA and Russian mafia members. And yet here it is— O’Keefe, glorified in the pages he reviles as he takes a Times contributor along for the ride as he scuttles across New Jersey in search of wasted taxpayers’ dollars.
O’Keefe has already become one of the most prominent voices of his generation– partly due to the fact that not many 27-year-olds get cable news airtime these days (it’s mostly O’Keefe and, somewhat ironically, Ezra Klein), and partially due to the effectiveness of his viral video campaigns– but the treatment he received in today’s Times is something entirely new. Here is the paragon of liberal establishment journalism portraying O’Keefe as a character of intrigue, giving him a fair shake in their pages. While O’Keefe has managed to cultivate the image of bratty activist without their help– part Abbie Hoffman, part G. Gordon Liddy, with the cautionary sensibilities of Julian Assange– the Times‘ O’Keefe comes off as something far more grown up: an action hero.

That is no exaggeration of the text, as writer Zev Chafets embellishes everything from O’Keefe’s community service (a punishment for illegally tampering with Sen. Mary Landrieu‘s telephones the goings-on in Sen. Mary Landrieu‘s office last year, initially reported to be phone tampering, but later reduced to “entering federal property under false pretenses“) to a dinner conversation where both writer and subject refuse to extend the privilege of trust to each other. The exchange reads like something out of James Bond, or perhaps Thank You For Smoking:

My first meeting with O’Keefe, a month or so earlier, was somewhat awkward. He arrived at the Chart House restaurant in Weehawken, N.J., right on time, but he seemed slightly surprised he had showed up at all. “You’re from The New York Times,” he said. “How can I be sure you’ll be objective and accurate?”

“The same way I can be sure you’re not filming this conversation,” I replied. […]

He came to the meeting with a large plastic bag full of newspaper clippings of his exploits. Most of them, he felt, were examples of shoddy journalism. O’Keefe is not a fan of the media. “All journalists are either pundits or stenographers,” he told me, a remark I duly noted in my notebook. “We need stenographers, as long as they record the truth,” he added graciously.

O’Keefe’s tone continues similarly throughout the piece, as he frets over revealing that the government has turned down some of his travel requests (“my enemies will use it against me,” he said darkly)  or asking in reference to his probation whether “we really want political prisoners in America.” That comment came after he clarified that his allusions to Russian writer Aleksandr Solzhenitsyn were not “comparing my situation to the gulag.” It’s a line that his enemies will use against him, but the context of the piece makes it apparent that Solzhenitsyn is not quite the appropriate historical figure to compare him to– that title more likely falls on Che Guevara, who traveled America trying to train and arm revolutionaries to struggled in the war against capitalism. So too, Chafets writes, O’Keefe dreams of traveling the country and training American muckrakers:

To him, this was the most galling restriction. O’Keefe aspires to more than making movies. He seems to be styling himself as the organizer and commander in chief of a vast guerrilla army of young conservatives trained in his methods and inspired by his example. “There are already dozens of teams out there working,” he told me. “And there are thousands more who want to learn and get involved. The more they restrict me, the more they inspire me.”

Given that he openly admires Saul Alinsky, the Che Guevara Foco Theory talk shouldn’t come as a surprise, regardless of the nature of his ideology. The shock is that the Times allows him to freely pursue what, by the third page of the profile, becomes obvious is his true life mission: to become one of the great names of history. It is difficult to forget in this piece that this is the same O’Keefe that became famous for wearing a pimp costume in his videos, or for, apropos of nothing, releasing a disco single. This is what distinguishes it from most of the literature about O’Keefe that comes from publications with which O’Keefe has no business ties: it fully indulges his thirst for celebrity, mostly ignoring the game of chicken he has been playing with his reputation since his ascent to national recognition.

But by playing into that, the Times also gives a fair shake to a series of revealing videos that many in the media, the Times perhaps in particular, refused to recognize fully precisely because of its source. It legitimizes the work O’Keefe has done, perhaps more than the dissolution of ACORN and the multiple firings at NPR have. Chafets weaves his name freely among labels many on the left would shudder at applying to O’Keefe, “journalist” paramount among them, breaking down the barrier that kept O’Keefe’s name on a liberal blacklist for years. For most on the left, the Times profile will do little to rehabilitate his image– if anything, it amplifies the traits they already hate about him. But it does welcome O’Keefe into the media elite in a way that was unthinkable when he released his first ACORN sting, a victory for him perhaps even greater than being allowed to leave New Jersey.