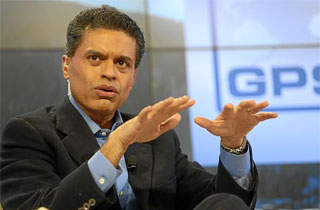 The anonymous team responsible for uncovering Benny Johnson‘s extensive plagiarism at BuzzFeed are back, and this time, their target is bigger, prominent, and thought-leadery.

Our Bad Media uncovered no less than twelve instances of plagiarism in CNN anchor Fareed Zakaria‘s extensive body of work, dated before he was accused of plagiarism back in 2012. Back then, he admitted to lifting sentences from a New Yorker article on gun control, but after suspending him and reviewing his work, his employers at the Washington Post, CNN, and TIME decided to write it off as an “isolated, one-time mistake,” as OurBadMedia characterized it, and continue to publish him to this day.

But according to Our Bad Media’s research, they didn’t actually review Zakaria’s work, and pointed out multiple incidents where he blatantly lifted passages from copy published by major news outlets, think tanks, and even Wikipedia.

You read that right: Fareed Zakaria allegedly copied from Wikipedia. Worse, he seemingly used a Wikipedia page to describe Reaganomics:

In August 2011, Zakaria wrote a TIME article titled “The Debt Deal’s Failure,” taking much of the nation’s leadership to task for which plagiarizes text from the summary of the Wikipedia article for Reaganomics.

“Fareed Zakaria is not a twenty-something digital media blogger charged with putting together Jurassic Park listicles,” OurBadMedia charged. “Fareed Zakaria is a news editor and a New York Times bestselling author who holds a B.A. from Yale and a Ph.D. from Harvard. In other words, someone who should be more than familiar with proper citation by now.”

UPDATE (5:08 PM EST): Talking Points Memo got a statement from Washington Post editorial page editor Fred Hiatt, who points out that they did their due diligence when it came to checking Zakaria’s WaPo-specific columns:

“If I’m not mistaken, the newest allegations feature only one WP column, and when I looked at that I thought it was so far from a case of plagiarism that it made me question the entire enterprise,” Hiatt wrote. “Take a look. Fareed uses some budgetary information that is also cited in a Center for American Progress report. There’s no lifting of language, and I’m sure I could find the same data in a dozen other reports. I honestly think it is reckless even to suggest this is plagiarism.”

TIME also told TPM that Zakaria had left the company as of last March, and quickly updated their masthead to reflect this.

UPDATE (6:25 PM EST): We received the following statement from CNN:

‎CNN has the highest confidence in the excellence and integrity of Fareed Zakaria’s work. In 2012, we conducted an extensive review of his original reporting for CNN, and beyond the initial incident for which he was suspended and apologized for, found nothing that violated our standards. In the years since we have found nothing that gives us cause for concern.

UPDATE (7:35 PM EST): Zakaria has responded to the new accusations, saying he was citing “facts,” not lifting language in examples provided by the anonymous bloggers.