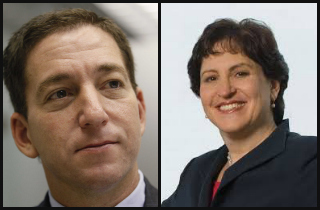 On New Year’s Eve Washington Post columnist Ruth Marcus attacked NSA leaker Edward Snowden as an “insufferable whistleblower” and boasted that she most certainly has not been the subject of the government’s metadata scrutiny. “Congrats,” Glenn Greenwald snarked in return, noting that Marcus is married to a top government official.

“Insufferable is the first adjective evoked by Snowden,” Marcus wrote in her column, “but it has numerous cousins: smug, self-righteous, egotistical, disingenuous, megalomaniacal, overwrought.” She mocked the leaker’s labeling of the NSA metadata collection as “Orwellian” and offered a take of her own [emphasis added]:

Yet the existing oversight, while flawed, is not as feckless as Snowden portrays it, and the degree of intrusion on Americans’ privacy, while troubling, is not nearly as menacing as he sees it. In the government’s massive database is information about who I called and who they called in turn. Perhaps the government shouldn’t have it; surely, there should be more controls over when they can search it. But my metadata almost certainly hasn’t been scrutinized; even if it has, the content of the calls remains off-limits.

That graf set Greenwald off:

Ruth Marcus boasts: "my metadata almost certainly hasn’t been scrutinized". Oh, well, in that case: who cares? Not like anyone else matters

Ruth Marcus boasts: "my metadata almost certainly hasn’t been scrutinized". Oh, well, in that case: who cares? Not like anyone else matters

Yes, Ruth Marcus, if you routinely defend top officials & are married to one, you're not a likely NSA target-congrats http://t.co/uZQP92ds4m

Greenwald also hit Marcus for “ignorance of the law” demonstrated in her column:

When Ruth Marcus says "the content of [my] calls remains off-limits", she is showing complete ignorance of the law http://t.co/ywxQVD7QFA