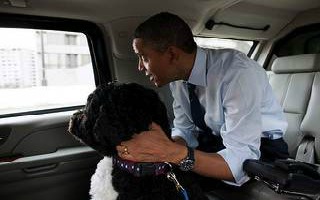 A long-overlooked passage in President Barack Obama’s 2004 book, Dreams From my Father: A Story of Race and Inheritance, has been uncovered and has ignited a firestorm of hilarity among conservatives on Twitter and other social networks. The passage includes the President talking about his experience as a boy in Indonesia when he was introduced to a variety of exotic meats including grasshopper, snake and – the coup de grâce – dog.

With Lolo [Soetoro], I learned how to eat small green chili peppers raw with dinner (plenty of rice), and, away from the dinner table, I was introduced to dog meat (tough), snake meat (tougher), and roasted grasshopper (crunchy). Like many Indonesians, Lolo followed a brand of Islam that could make room for the remnants of more ancient animist and Hindu faiths. He explained that a man took on the powers of whatever he ate: One day soon, he promised, he would bring home a piece of tiger meat for us to share.”

Treacher makes it clear that this narrative will serve as a counter to the oft-repeated refrain that former Massachusetts Gov. Mitt Romney is an unfit caretaker, let alone a president, because he put his dog in a container on the roof of his car while on a long trip.

Hey, whatever you have to tell yourself, libs. Say what you want about Romney, but at least he only put a dog on the roof of his car, not the roof of his mouth. And whenever you bring up the one, we’re going to bring up the other. It’s no fun when we push back, is it? That’s why it’s so much fun.

Treacher’s post quickly evolves into a series of one-liners about Obama’s experimentation with non-traditional comestibles.

Update: I know the Secret Service has a lot to deal with right now, but are they protecting Bo? From Obama, I mean.

Update: Obama would never put a dog on top of a car. Dries out the meat.

Update: Libs think Romney acted jerky with a dog. Whereas Obama was fond of dog jerky. But hey, like they say: If you want a friend in Washington, get a dog. If you want a dog in Washington, keep it away from Obama. Oh, and:
Q: What does Obama do when his dog gets stuck?
A: Grabs a toothpick.

Update: Back in Sept. 2010, Obama complained about his opponents — quite a shock, I know — by saying, “They talk about me like a dog.” I hope he informed the Secret Service.

Update: On Facebook, there’s a page called Pet Lovers for Obama. I’m going to go check out their recipes.

At approximately 9 p.m. on Tuesday, conservatives took to Twitter to take part in the mockery themselves. Quickly, the hashtag “#ObamaDogRecipies” took off and began trending across the United States. Michelle Malkin’s Twitter aggregator Twitchy captured the best of the best, but we would like to add a few of our own:

This story could not be contained to conservatives on social media for long. Even ABC News’ Jake Tappercommitted the rapidly coalescing meme to print at 11 p.m. on Tuesday, in an ABC News online piece “Obama as a Boy Ate Dog Meat.”