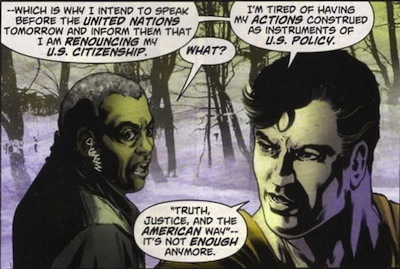 First the new movie casts some British guy and now this?! The super-sized 900th issue of Superman comic Action Comics has hit the news stands and it’s got stories written by all kinds of interesting people like Richard Donner and Damon Lindelof. However, no one cares about that because it also has a scene where Superman announces he’s renouncing his American citizenship. Before you could say “Mr. Mxyzptlk” (ok, way before), the Internet was acting accordingly. The conservative blogs erupted in indignation while the comics blogs began seeking out the funniest comments on Fox Nation.

So, wait. Why is the greatest American who was ever born farther from America’s shores than Kenya no longer an American? Well, the moment occurs in a story written by Batman Begins and The Dark Knight co-writer David S. Goyer. I’ll let Comics Alliance describe the scene since my comics knowledge ends with knowing that there’s a Superman character named Mr. Mxyzptlk.

The key scene takes place in “The Incident,” a short story in Action Comics #900 written by David S. Goyer with art by Miguel Sepulveda. In it, Superman consults with the President’s national security advisor, who is incensed that Superman appeared in Tehran to non-violently support the protesters demonstrating against the Iranian regime, no doubt an analogue for the recent real-life protests in the Middle East. However, since Superman is viewed as an American icon in the DC Universe as well as our own, the Iranian government has construed his actions as the will of the American President, and indeed, an act of war.

Superman replies that it was foolish to think that his actions would not reflect politically on the American government, and that he therefore plans to renounce his American citizenship at the United Nations the next day — and to continue working as a superhero from a more global than national perspective. From a “realistic” standpoint it makes sense; it would indeed be impossible for a nigh-omnipotent being ideologically aligned with America to intercede against injustice beyond American borders without creating enormous political fallout for the U.S. government.

That certainly seems to follow the “more realistic” approach that Goyer brought to Christopher Nolan’s Batman movies (the Bat-Mobile would obviously be a tank in real life). Also, the idea of Superman struggling with his seeming inseparable connection to America is nothing new. In the seminal Frank Miller book The Dark Knight Returns, Superman’s boy-scout qualities are critiqued as he is depicted as a kind of unquestioning lap dog for the American government who would kill his own friend Bruce Wayne just because the President ordered it. Still, having a panel where the Man of Steel actually says that “truth, justice, and the American way [is] not enough anymore” seems more than enough to cause a nationwide pseudo-crisis. After all, people freaked out when Wonder Woman’s costume seemed slightly less American flag-y.

So, yes, folks. Feel free to get furious. Fortunately, once we all boycott Superman comics, there are still other wholesome American activities we can enjoy. Like baseball.