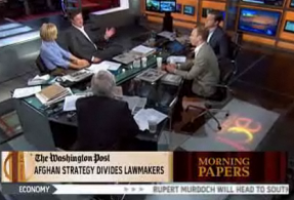 The set of Morning Joe became particularly tense this morning when host Joe Scarborough and author Max Blumenthal got into a remarkably strained back-and-forth over, you guessed it, right-wing versus left-wing criticisms of Administration’s past and present. Blumenthal was on to promote his new book Republican Gomorrah, a title that might have tipped Morning Joe producers off on just how the segment might turn out.

From the outset, Scarborough seemed eager to dive into a meaningful discussion with the arguably polemical author, seemingly going on the attack from the start. But Blumenthal did not back down – dishing it out just as well as he took it. At one point late in the interview, a frustrated Scarborough said to his guest “You’re intolerant!” then ultimately finished with an exasperated “I’m done,” leaving co-host Mika Brzezinski to somewhat awkwardly wrap-up the discussion with a polite “I think we’ll leave it there. Thanks for coming though!”

Max Blumenthal summed up the experience on his blog:

So I got into it with Joe Scarborough today on Morning Joe. Joe came out of the gate hard, assigning what I think were false equivalencies between the Democratic establishment and the far-right controlled GOP, and we were soon locked in a heated confrontation. I regret that our discussion became so contentious since Joe was gracious to invite me back on and we seemed to have had a good rapport in the past. Afterwards I gave Joe a little box of Sarah Palin Embarassmints and handed Tom Brokaw a copy of my book. Joe was visibly upset. Brokaw flipped through the book and remarked to me (as I was being rushed off a very tense set), “I’ll read any book that has at least two references to Bristol Palin!”

This interview was apparently scheduled after a previous appearance Blumenthal made on the show, in which they discussed — in a much more genial way — the protest of 9-12 (a clip of which is included lower in this post.)