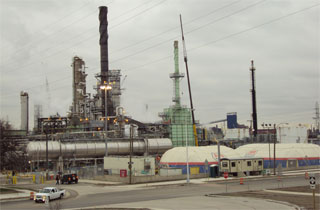 In an attempt to get more people hired in Detroit, the city decided to award a $175 million tax break to Marathon Petroleum as it underwent a “massive expansion project.” This should have been enough to get a significant number of people hired, but today the City Council blasted the refinery for using all that money to hire just 15 Detroit residents.

(We’re pretty sure that each resident did not receive a $11.6 million salary, or anything close to that amount.)

According to the Detroit Free Press, Marathon Petroleum has 514 employees, hiring an additional 194 people ever since the $2.2 billion expansion began in 2007. Out of those employees, however, only 30 of them are from Detroit, and 15 of those employees were hired in the expansion, which the City Council find ludicrous. (The city is experiencing double-digit unemployment, after all.)

The refinery defended itself by claiming they couldn’t find any qualified employees in the entire city of Detroit, even though they’re committed to hiring Detroiters. (They even funded an engineering scholarship in order to train potential workers!) “We would like nothing better than to have a higher percentage of Detroit residents in our workforce,” refinery general manager Tracy Case reiterated to a council meeting last month, “but there are certain difficulties and challenges and obligations we have to our company to find the best people to work for us.”

The city isn’t buying it, citing examples of other major employers who managed to hire a significant number of Detroiters, and reminding Marathon that they were projected to hire 60 Detroit residents. But, admitted one councilmember, the city probably should have been more strict about corporations hiring actual Detroiters, because this has happened before:

In early February, veteran council members [Brenda] Jones and James Tate sought but failed to get a guarantee to hire Detroiters in post-construction jobs at the new Red Wings arena. Without the guarantee, they each cast a “no” vote on legislation related to the arena project, but the measure passed.

“I know that Madam President (Jones) beat the arena about the head and shoulders about” a post-construction job guarantee, said first-term Councilman Scott Benson, who voted in favor of the hockey arena legislation. “Now I see why it’s so important that we put language into these contracts about post-construction jobs.”