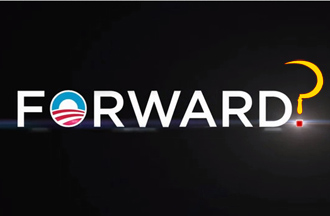 I’ll give you a very, very short answer: No.

But (surprise!) some on the right have gone lengths to prove that President Obama‘s new one-word slogan (“Forward”) is borrowed from “decades of communist iconography,” thus embracing his inner-Marxist.

The Washington Times writes that “Forward” has a “long and rich association with European Marxism,” even quoting Wikipedia (?!) to describe how the word has been historically used as a name for radical left-wing publications.

To be fair, the Times doesn’t outright call Obama a communist, but they sure do imply it:

Conservative critics of the Obama administration have noted numerous ties to radicalism and socialists throughout Mr. Obama’s history, from his first political campaign being launched from the living room of two former Weather Underground members, to appointing as green jobs czar Van Jones, a self-described communist.

Breitbart.com also enters the “Obama Slogan Is Marxist” game, as writer Jim Pollack notes the historic use of the word by communists, Marxists, and…fascists:

…[T]he Obama campaign is attempting to evoke the romantic sentiments that “forward” excites in the left-wing imagination, promoting collective responsibility and action as the answer to America’s challenges.

The Weekly Standard‘s Bill Kristol notes that “Forward” was used by former Chinese dictator Mao Zedong during one of his most notoriously murderous campaigns:

The most famous modern use of “Forward” to characterize a major political effort was in the “Great Leap Forward,” in China, sixty years ago. We know President Obama has lamented that he’s not president of China, because it’s so much easier to run things there. Is there a little sublimated wishful thinking in his choice of his new campaign slogan? […] So if “Forward” is the slogan for the Obama campaign, would “Cultural Revolution” be the slogan for the second term?

Yikes. Even if that’s supposed to be playful humor, why bother making the joke? No serious person could actually think President Obama is an avowed Marxist with desires similar to communist China. If anything, I’d call Obama a “corporatist,” for many of his policies (like previous presidents) benefit large companies and well-connected political groups at the expense of everyone else. But communist/Marxist/Maoist/fascist he is not.

ThinkProgress also hilariously points out that “Forward” is the state motto of Wisconsin, “so unless Kristol et. al. are willing to concede that Republican Gov. Scott Walker and the state’s 6 million residents are abiding the communist/fascist threat, the attack on Obama falls a bit flat.”

But I think I know where Obama’s slogan has its insidious roots: in thousands of years worth of describing a directional movement.