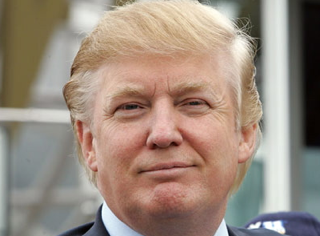 Donald Trump is sure making the media busy these days. Besides being a persistent presence– either in person or in commentary– on cable news, Trump took to print this weekend to reply to a column by Gail Collins dismissing his presidential ambitions. “I have great respect for Ms. Collins in that she has survived so long with so little talent,” he begins, before a lengthy defense of his investigation into President Obama’s birth.

In an enraged, often grammatically questionable letter, Trump laughs at Collins’ “storytelling ability and word usage” while parenthetically praising himself– “(coming from me, who has written many bestsellers).” He returns to Collins, calling her use of the word “birther” “derogatory,” at least the way she used it, but not before going once again into detail of his “evidence” that President Obama was not born in America:

He has not been able to produce a “birth certificate” but merely a totally unsigned “certificate of live birth”-which is totally different and of very little significance. Unlike a birth certificate, a certificate of live birth is very easy to obtain. Equally of importance, there are no records in Hawaii that a Barack Hussein Obama was born there-no bills, no doctors names, no nurses names, no registrations, no payments, etc. As far as the two notices placed in newspapers, many things could have happened, but some feel the grandparents put an ad in order to show that he was a citizen of the U.S. with all of the benefits thereto. Everybody, after all, and especially then, wanted to be a United States citizen.

He concludes his screed with a truth: that any journalist who found definitive proof that President Obama was not American “would become the hottest writer since Watergate, or beyond” (he is, we’ll venture a guess, referring to Bob Woodward and Carl Bernstein with the “Watergate,” and the Teapot Dome Scandal with “beyond”). But his letter ends with no ill will, and instead urges Collins to join the cause. “Open your eyes, Gail,” he pleads, “there’s at least a good chance that Barack Hussein Obama has made mincemeat out of our great and cherished Constitution!”

The letter, with all the flair and drama that make Donald Trump Donald Trump, leave us with only one major question: what would a world in which Donald Trump had an active Facebook profile be like?