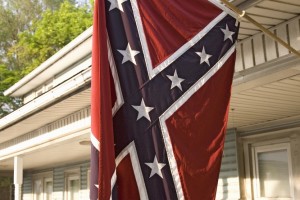 Despite the renewed debate over whether the Confederate flag in South Carolina is a symbol of Southern heritage or a reminder of racism, it has become clear that doing anything about it will take time. That’s because deep-seated legal processes and staunch partisan (and racial) divisions make it very difficult to remove the flag from its current place of prominence.

Burn it, and not just the flag in Charleston, but all of them. Burn all of the Confederate flags.

In “Fight racist fire with literal fire: Burn Confederate flags,” Lapointe advocates for the destruction of all Confederate flags. Specifically, the author notes that the act would merely be an “exercise [of activists’] First Amendment right to free speech,” since flag burning and similar acts of protest are protected by the U.S. Constitution.

While he does note that those who decided to burn the flag should do so with safety in mind, Lapointe emphasizes the offending nature of such an act:

Of course, burning the Confederate flag would be disrespectful. That is exactly the point.

There is no need to respect a symbol that is as evil and vicious to African Americans as the Nazi swastika flag is to Jews. In fact, it is important to actively disrespect the banner that represents a pure form of human evil.

The display of the Confederate flag — anywhere — is a nonverbal statement of race hate. Its burning would be a nonverbal response to its crude attitude. You’re sure not going to change their attitudes with sweet reason. Fight their figurative fire with the real thing.

You can read the entire op-ed here, and if you’re really brave, you can always check out the comments section.