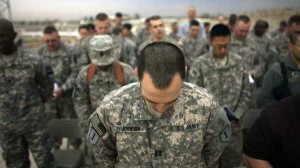 After observing that soldiers who subscribed to a spiritual belief system were at less risk for suicide and other negative behavior caused by the stress of war, the Army developed a test to gauge soldiers’ “spiritual fitness”. As it turns out, however, not every soldier has a whole lot of faith in this survey. (It’s ok to laugh. Raucously and for an extended period of time.)

NPR’s “All Things Considered” takes a look at how one particular soldier – self-described “foxhole atheist” Justin Griffith – dealt with having to take the army’s computerized test, which asks survey-takers to respond to statements such “I am a spiritual person. I believe that in some way my life is closely connected to all of humanity. I often find comfort in my religion and spiritual beliefs.” and “In difficult times, I pray or meditate.” Griffith, for one, believes such statements have nothing to do with one’s ability to be a “fit” soldier.

The icing on the cake for Griffith was the result he got after completing the test:

Spiritual fitness may be an area of difficulty.

You may lack a sense of meaning and purpose in your life. At times, it is hard for you to make sense of what is happening to you and to others around you. You may not feel connected to something larger than yourself. You may question your beliefs, principles and values.

Improving your spiritual fitness should be an important goal.

Griffith wondered whether this meant that the Army was, essentially, telling him that his atheism was impeding him from being the best soldier he could be.

Brig. Gen. Rhonda Cornum, however, points out that the test is not mandatory and that there’s no consequence to taking it, regardless of the outcome.

But Mikey Weinstein, a former Air Force lawyer and founder of the Military Religious Freedom Foundation, thinks there is more to the story. He believes the test is a means of promoting organized religion – specifically evangelical Christianity – rather than simply encourage soldiers’ “spirituality.” And, he says, it’s unconstitutional. Weinstein promises that, if the Army does not do away with the spirituality fitness test, he will file a lawsuit on behalf of his clients next week.