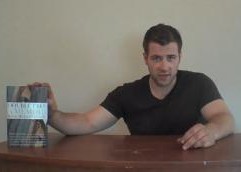 We’ve mentioned before that merely publishing a book is not enough to sell it — nowadays unless you’re Dan Brown or Sarah Palin, an author needs to push his or her masterpiece hard, with viral videos and constant twittering and inventive distribution ploys and eating many knishes.

First-time author Kevin Connolly clearly gets that. And he’s put together a little promo video for his upcoming book, Double Take, that is sure to get attention.

I didn’t know anything about the book when I started watching the video. Initially I thought, “Good-looking guy, smart to put him on video” — because let’s face it, a nice-looking pitchman (or women) always helps. I had no idea how much Kevin’s looks would come into it.

It was at the point where he mentioned having no legs that I had my first double-take. What? He said it again. Then I double-taked back to the book’s description:

Kevin Michael Connolly is a twenty-three-year-old who has seen the world in a way most of us never will. Whether swarmed by Japanese tourists at Epcot Center as a child or holding court at the X Games on his mono-ski as a teenager, Kevin has been an object of curiosity since the day he was born without legs.

Growing up in rural Montana, he was raised like any other kid (except, that is, for his father’s MacGyver-like contraptions such as the “butt boot”). As a college student, Kevin traveled to seventeen countries on his skateboard and, in an attempt to capture the stares of others, he took more than 30,000 photographs of people staring at him. In this dazzling memoir, Connolly casts the lens inward to explore how we view ourselves and what it is to truly see another person.

The video shows Kevin first behind a desk, and then in a variety of other locations, doing regular stuff, except doing it without legs. Kevin has an advantage over the unsuspecting viewer: He’s not shocked by any of this. He does, however, damn well know you will be (see above re: those 30,000 photos). This video is mesmerizing, and when you get past the shock of this athletic, jovial kid having no legs, it’s also pretty funny. It is, however, one thing even more important than that: It’s effective. I want to buy this book. Hell, I want to buy two of them, and give the other one as a gift (possibly to a person who complains a lot). This is perhaps one of the most effective viral book videos ever made, because it does the one essential thing that a book is simply not built to do: Show, not tell. Wow, does it ever.

Video below; more information — including link to purchase for when you’re feeling sorry for yourself — here.