E.J. Dionne Would Like Justice Scalia To Resign For Having Too Many Opinions 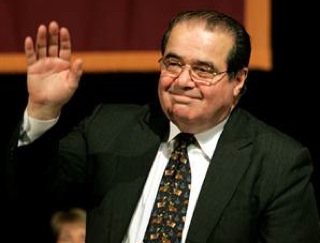 Perennial liberal thorn-in-the-side Justice Antonin Scalia has gone too far with this “having opinions about legal matters” thing that totally defies his job description, according to Washington Post columnist E.J. Dionne today. Justice Scalia, the staunch originalist whose dissents have made his name an indelible one in the Court’s history, mentioned the President’s executive policy on immigration after the Arizona decision, while noting that the state had one of the biggest illegal immigration problems in the court. This, Dionne writes, would make him “a heck of a columnist and blogger,” but an “arrogant” and, he implies, dangerous Supreme Court Justice.

RELATED: Why The Health Care Decision May Be Less Dramatic Than Expected

“So often, Scalia has chosen to ignore the obligation of a Supreme Court justice to be, and appear to be, impartial. He’s turned “judicial restraint” into an oxymoronic phrase,” Dionne writes, citing as an example the Justice’s bench statement on the executive policy on immigration released recently. “Obama’s move had nothing to do with the case in question. Scalia just wanted you to know where he stood,” he suggests, though, solely by the virtue of quoting the bench statement itself, manages to contradict himself in the next sentence. In that statement, Justice Scalia says, “Arizona bears the brunt of the country’s illegal immigration problem. Its citizens feel themselves under siege by large numbers of illegal immigrants who invade their property, strain their social services, and even place their lives in jeopardy. Federal officials have been unable to remedy the problem, and indeed have recently shown that they are simply unwilling to do so.”

“Cue the tea party rally applause,” Dionne writes snidely, after the Justice making a legal point about the power of states versus the federal government. What Dionne leaves out of his argument on how issues that can be used in the public arena to dredge up political support should, for some reason, be exempt from discussion on the Court is that this argument is to be found right in the majority opinion for this case– an opinion that Dionne seems not to have much of a problem with, given he hasn’t called for Justice Anthony Kennedy‘s head. “Statistics alone do not capture the full extent of Arizona’s concerns,” Justice Kennedy wrote in his opinion. “Phoenix is a major city of the United States, yet signs along an interstate highway 30 miles to the south warn the public to stay away. One reads, ‘DANGER– PUBLIC WARNING — TRAVEL NOT RECOMMENTED [sic].'” Why doesn’t Justice Kennedy get tea party applause and the boot for that?

Partially because this is not Dionne’s only grievance. He also takes a strong moral stand against Justice Scalia for hunting:

“Recall a 2004 incident. Three weeks after the Supreme Court announced it would hear a case over whether the White House needed to turn over documents from an energy task force that Dick Cheney had headed, Scalia went off on Air Force Two for a duck-hunting trip with the vice president.

Scalia scoffed at the idea that he should recuse himself. “My recusal is required if . . . my ‘impartiality might reasonably be questioned,’ ” he wrote in a 21-page memo. Well, yes. But there was no cause for worry, Scalia explained, since he never hunted with Cheney “in the same blind or had other opportunity for private conversation.”

Don’t you feel better? And can you just imagine what the right wing would have said if Vice President Biden had a case before the court and went duck hunting with Justice Elena Kagan?”

There is a lot to scoff at in these three paragraphs– for one, the fact that Dionne spends half of the article mocking the tea party before using their hypothetical reaction to an act by Justice Kagan as evidence against Justice Scalia’s wild and crazy behavior. And another, the fact that the first thing every American law student learns on their first day of class is that Justice Scalia is one of the more social characters on the Court. His “best friend” that he often goes on opera adventures with is Justice Ruth Bader Ginsburg, which doesn’t seem to disturb Dionne much– nor does the fact that Justice Scalia took Justice Kagan on one of those outrageous hunting trips, as well. And, of course, there is a bit of a problem with making the point that this week definitively proved Justice Scalia needed to leave the bench and then citing evidence for this brand new argument from… 2004.

Generally, most calls for people to resign who are not being investigated by the FBI or Congress are chuckle-worthy slow news day fodder, and this is likely no different. It is true that with Justice Scalia gone, a powerful and often just barely not political voice that caused many a left-winger distress would go silent, which Dionne appears to believe is a good thing. But if the best he can do is point out that Justice Scalia has opinions when he is being paid by taxpayers to write opinions and that his social life involved outings with people in power almost a decade ago, the master of colorful dissents has nothing to worry about anytime soon.