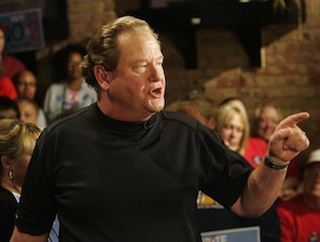 The host at the core of MSNBC’s primetime lineup, the head of Newsweek and the President of the United States are all among the “Least Influential People Alive,” at least according to GQ, set to dole out the full list of dubious distinctions next month. The ego-crushing list also includes some random no-brainers like Tim Pawlenty and Tia and Tamara Mowry, but also seems to consider President Obama among those least relevant.

TV Newser and Forbes have gotten ahold of some of the write-ups for the awards, some more extensive than others. Ed Schultz lands on the list, it seems, simply for having a show and not much of a fanbase to the extent GQ is aware. “Do you watch “The Ed Show” on MSNBC? Of course you don’t. No one does,” they write snarkily. Tina Brown is awarded much less pity in her write-up, although by claiming that people now hate Newsweek, GQ somewhat gives away that she influences the way people think (about Newsweek):

Brown spent 2011 transforming Newsweek from a magazine no one reads into a magazine no one reads but everyone despises. That’s what happens when you star-f**k the corpse of Princess Diana by Photoshopping her at age 50 for your cover, then do a separate Photoshop of her holding an iPhone, and then create a fake Facebook page for her that includes wall posts from Deepak Chopra. Did you know Tina and Di were friends? They were! This Photoshopped image of them having lunch with Stevie Nicks is proof!

TV Newser has some more of the names on the list:

While it’s hard to argue that Tim Pawlenty– who has been relegated to helping out in Tunisian elections after not being able to land a Fox News gig after running out of money for his presidential campaign in Iowa– isn’t completely irrelevant as anything more than a trivia answer in an “I Love the 2010s” nostalgia round, naming both the Speaker of the House and the President of the United States as people who have no impact on anyone’s lives feels like a bit of a stretch. In fact, both Republicans and Democrats would argue that those leaders have too much influence over the daily lives on Americans, not less.

RELATED: Herman Cain Tells GQ Men Don’t Want A ‘Sissy Pizza’ Loaded With Veggies (Though He Does Like Arugula)

The inclusion of Tia and Tamara Mowry also seems completely random, like a childhood grudge come to life. Why not Vanilla Ice, or one of the twins from that hair band Nelson? Or, for that matter, one-hit wonders like Steven Slater and “Golden-Voiced Homeless Man” Ted Williams (we remain with the hope that “Hipster Cop” is still an influential figure)? By opening up the list to people who were famous at any point in history for whatever reason, it makes the category far too big to judge in full. But it’s too early to judge on rationale, as the entire list (and why they were chosen) is set to debut in December– hopefully along with the metric for how they put this one together.