Every Media Outlet: Hillary Grandkid the Most Consequential Baby Since Jesus
video

Every Media Outlet: Hillary Grandkid the Most Consequential Baby Since Jesus 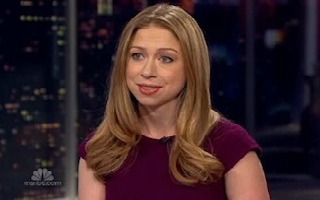 Less than 16 hours after Chelsea Clinton announced she was pregnant, a lot of major news outlets started staring into the crystal ball of Chelsea’s womb, wondering what this currently floating zygotic multicellular being meant for the prospects of Hillary Clinton’s 2016 campaign, which is also a floating, zygotic, multicellular being.

Their answer: The immaculately conceived Clinton child could mean everything.

And no, it’s not just the fact that having a grandchild could be personally fulfilling to Hillary and Bill (mazel tov, by the way), or that a cute baby would be a sweet cherry on top of Hillary’s already full life sundae. No, everyone speculated that the baby would be so momentous, so crucial to Hillary’s thinking, that entire presidential campaigns — nay, the entirety of history itself — hung in the balance.

POLITICO prefaced their theorizing with the caveat that it “would be crass and inappropriate under the circumstances” to speculate too much on what America’s Finest Fetus means for Hillary’s prospects. But then they did it anyway:

For months — at least — many in the extended Clinton political orbit have also shared the view that Chelsea Clinton’s family status would weigh on her mother’s 2016 calculus in one way or another.

On the one hand, the armchair thinking goes, having a grandchild may make the Iowa State Fair a less appealing place to spend the summer of 2015. Why beg donors for money at dozens of events a month when there’s a happy baby to spend time with in New York?

On the other hand, a grandchild could also heighten the pull of history for Clinton — the sense that she owes it to the daughters of future generations to walk the rest of the path toward becoming the most powerful woman in history.

A Washington Post columnist added that this unborn child could be a powerful weapon against the forces of apathy and political despair, even if its presence remains unseen:

Even if Baby Clinton-Mezvinsky isn’t a physical presence on the presidential campaign trail, he or she is certain to provide lots of new material — heartwarming, adorable anecdotes – that the proud gandparents would certainly be able to deploy in the many interviews and speeches they’d make if Hillary runs. Because nothing warms up a crowd like a diaper-changing joke.

And in a Washington Monthly column entitled “Nana for President: Could becoming a grandmother ease Hillary Clinton’s path to the White House?”, the answer was…perhaps:

The most obvious risk to her new role is that it will inevitably highlight her age, a vulnerability some conservatives have already begun exploiting…She will also likely provoke a national water-cooler debate, as no male candidate would, over whether she is too involved in her grandchild’s life, or, more likely, not involved enough—“How can she have time to be a good grandmother,” people will ask, “when she’s out running for president?”

But while these risks are real, so are the potential political rewards. “In a world where nearly 40 percent of new mothers are single, many communities rely on grandmothers to hold together the whole family,” said Anne Liston, a Democratic strategist. “The image of a grandmother is one of a compassionate caregiver.”

On MSNBC’s Morning Joe, Andrew Ross Sorkin and the panel settled into their roles as the Three Wise Wonks*. “I’m not suggesting that Hillary had this baby for election purposes…but the point is, an entire family is going to watch a family have a child. It’s a human drama, people can get behind this. This is going to change the way that people look at Clinton.”

All these other media outlets have baby opinions, too.

We haven’t seen an unborn baby placed under this much scrutiny since the British Royal Baby, but at least that royal baby knows that it’s going to be King one day and doesn’t have to worry about winning elections.

Scratch that — people probably haven’t expected this much from a baby since Jesus.

UPDATE: There is, however, THIS smart take.