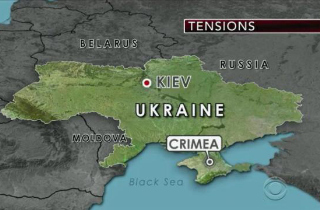 While we’re all flashing back to the olden days when various officials warned of Russia’s potential push into Ukraine’s Crimea peninsula, here’s an interesting tidbit via the International Business Times: Diplomatic cables from 2006 and 2009, unearthed by WikiLeaks in 2011, show Ukrainian officials fretting over an emboldened Russia, asking for help to stem the potential for an invasion.

“With Ukraine under intense pressure from Russia, any appearance of U.S. disengagement from the region will embolden Russia further,” then-U.S. diplomat Alexander Vershbow wrote from the Ukrainian capital of Kiev.

At another point, Vershbow wrote that Ukrainian security official Raisa Bohatyrova told him that the Kremlin is “directly interfering” in its former territory’s political affairs. “Bohatryova said she believes Russian intelligence has devised plans for the dismemberment of Ukraine,” the U.S. diplomat explained.

Similarly, a 2006 cable from U.S. State Department official Sheila Gwaltney relays Ukrainian concerns “that the overall degradation of Kyiv’s ability to assert central power and authority in the past two years has provided a conducive climate for destabilizing efforts, particularly in Crimea.”

More from the WikiLeaks-obtained 2006 cable, via the IBTimes report:

Gwaltney reported that her Ukrainian counterparts said Russia was trying to slowly take control of the ethnically divided peninsula by increasing “communal tensions.” Russia, they said, is attempting to “destabilize Crimea, weaken Ukraine, and prevent Ukraine’s movement west into institutions like NATO and the EU.”

“[S]everal Crimean journalists referred to as Ukraine’s ‘soft underbelly,'” the U.S. official wrote at the time.