Frank Rich: Even If They Win Tea Partiers Will Never Get Into GOP Back Rooms

Frank Rich: Even If They Win Tea Partiers Will Never Get Into GOP Back Rooms 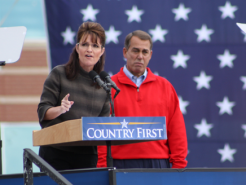 Who has the most to lose from a Tea Party victory this Tuesday? Frank Rich thinks the Tea Partiers themselves might since they will immediately be confronted with the fact they have merely been puppets of the GOP establishment all along, used to “camouflage its corporate patrons and to rebrand itself as a party miraculously antithetical to the despised G.O.P. that gave us George W. Bush and record deficits only yesterday.” All this so-called Tea Party power is merely an illusion, says Rich, and come Wednesday it will simply be politics as usual…at least in the beginning.

But whatever Tuesday’s results, this much is certain: The Tea Party’s hopes for actually affecting change in Washington will start being dashed the morning after. The ordinary Americans in this movement lack the numbers and financial clout to muscle their way into the back rooms of Republican power no matter how well their candidates perform.

Here’s who will be in those backrooms.

The main dining room remains reserved for Koch’s fellow oil barons, Lott’s clients, the corporate contributors (known and anonymous) to groups like Rove’s American Crossroads, and, of course, the large coterie of special interests underwriting John Boehner, the presumptive next speaker of the House. Boehner is the largest House recipient of Wall Street money this year — much of it from financial institutions bailed out by TARP.

The result? Beware the Mama Grizzly!

The tempest, however, will not be contained within the tiny Tea Party but will instead overrun the Republican Party itself, where Palin, with Murdoch and Beck at her back, waits in the wings to “take back America” not just from Obama but from the G.O.P. country club elites now mocking her. By then — after another two years of political gridlock and economic sclerosis — the equally disillusioned right and left may have a showdown that makes this election year look as benign as Woodstock.

Related: The Grand Old Plot Against the Tea Party [NYT]