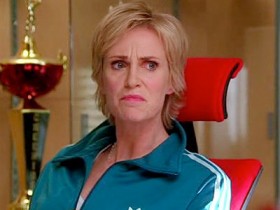 Things are not very gleeful at Newsweek these days (apologies for the pun). The magazine is up for sale, editor Jon Meacham has been the subject of a whole lot of backlash, and now Glee wants people to boycott it. I’m not entirely sure what the overlap between Glee watchers and Newsweek readers is (though I suspect it’s probably higher than a lot of people might imagine), that said, I’m fairly certain this is not the sort of headline Newsweek is looking for.

In an open letter yesterday Glee creator Ryan Murphy slammed the magazine for this recent article that suggested gay actors should not try to play straight because they are not convincing. The author of the Newsweek article used openly gay actors who are playing straight characters in both Glee and the current Broadway show Promises, Promises, to make his point. People were not amused. Said Murphy in his letter:

Today, I have asked GLAAD president Jarrett Barrios to stand with me and others and ask for an immediate boycott of Newsweek magazine until an apology is issued to Sean Hayes and other brave out actors who were cruelly singled out in this damaging, needlessly cruel, and mind-blowingly bigoted piece…Would the magazine have published an article where the author makes a thesis statement that minority actors should only be allowed and encouraged to play domestics? I think not.

Murphy’s call for action followed Kristin Chenoweth’s equally angry reaction to the piece; Chenoweth stars in Promises, Promises and has had a recurring role on Glee.

Ramin Setoodeh, the author of the article, is himself openly gay and has responded to the criticism on Newsweek.com saying that “I meant to open a debate—why is that? And what does it say about our notions about sexuality? For all the talk about progress in the gay community in Hollywood, has enough really changed? The answer seems obvious to me: no, it has not.” Which sounds a teeny bit like Andrew Sullivan’s justification for his recent focus on Elena Kagan’s sexuality. And is quickly becoming an equally hot topic in the entertainment world.

For what it’s worth, I am a regular watcher of Glee and I had no idea the actor who plays Rachel’s boyfriend was gay in real life….nor do I care. Sort of like I don’t care that the actor that plays the character in a wheel chair can walk in real life. Sort of like I didn’t care that Martin Sheen could never under any circumstances be the President of the United State. I think it’s called suspension of disbelief and it’s required a lot…especially when watching shows like, say, Glee, or movies like Up In The Air where I am required to believe that someone who looks like George Clooney would actually fly around the country and fire people for a living (Setoodeh suggests if Clooney came out we’d no longer be able to watch him). Or that (fill in hot actor’s name here) is actually capable of saving the world or being (fill in untenable fictional profession here). I am more than happy to concede these things are not necessarily grounded in reality, and more than happy to enjoy them anyway.

Interestingly, Seetodeh doesn’t bother to mention that Jane Lynch, the actor who plays Sue Sylvester in the show, is also openly gay, which make me wonder if his theory only applies to people whose real life lives Seetodeh actually pays attention to. Me thinks he maybe needs to stop reading so many celebrity magazines. In the meantime, here is a clip from last week’s Glee during which Mr. Schue ‘rehabilitates’ Vanilla Ice’s ‘Ice Ice Baby’…warning, this will also require a rather serious suspension of disbelief.