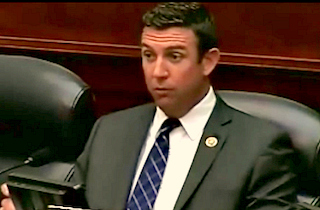 The co-chairman of Donald Trump‘s House Leadership Committee Rep. Duncan Hunter said Friday that you can’t expect Trump to do everything he says he will, but you can expect him to do what he says he will. His attempt to reconcile the two ideas went about as well as can be expected.

Hunter and his fellow Trump supporters in the House were being grilled by reporters Friday. “I think what he says and what he’ll do are two different things,” Hunter said after saying he was done with trying to explain Trump’s comments.

“What he said,” replied Hunter.

“But you just said you don’t necessarily believe what he says is what he’s going to do,” DeBonis pressed. Hunter’s response was somewhat inelegant:

Oh, that clears that up.