GQ Blows The Doors Off Of Marvin Harrison’s ‘Quiet’ Reputation

GQ Blows The Doors Off Of Marvin Harrison’s ‘Quiet’ Reputation 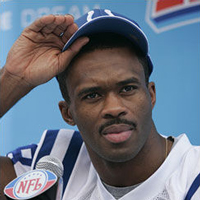 GQ’s upcoming profile of one of the greatest football players of all time has the sports world abuzz, and the fallout may be more explosive than what has befallen Tiger Woods.

In their February issue, GQ takes a closer look at the April 29th, 2008 shooting involving former Indianapolis Colt Marvin Harrison, using police reports and eyewitness testimony to suggest that Harrison may have shot a Philadelphia drug dealer, arranged to have him killed, and intimidated potential witnesses. The story comes more than a year after the Philadelphia D.A. refused to press charges against Harrison because of conflicting witness testimony.

“Nixon was across the street and thirty yards away when Harrison started shooting. Pop pop pop pop pop pop—a great staccato gust of bullets. Steadily, Nixon says, Harrison unloaded both guns into the fat man’s car, stippling the red Toyota Tundra with bullet holes as the fat man ducked in his seat.”

If a professional athlete really did shoot someone in broad daylight, then how has the story gone under the radar for so long? Some of it can be attributed to the conflicting reports of that day, but it’s mostly due to the reputation of the athlete involved. Harrison’s quiet demeanor on and off the field was seen as a welcome change from his contemporaries, and sportswriters painted him as humble and almost virtuous. Once the D.A. dropped the case, the media did too, choosing instead to stick to the image of Harrison that they had created.

Now that image is no more, and GQ wonders how one of the best athletes in the world went so long without revealing anything about himself:

“Think about the discipline it would take to make a living as an elite star of a multi-billion-dollar entertainment juggernaut without ever once being truly seen. In this sense, Harrison’s football career is not only historic; it’s also a sort of miracle. The dude skipped like a flat stone across a rancid pool and emerged, twelve years later, dry as a bone.”

If it wasn’t for GQ’s investigative reporting, the world would have still known very little about who Marvin Harrison really is, what he did, and where he came from. It definitely would have been easier that way.