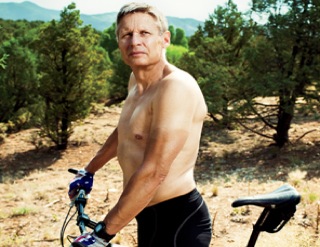 Former governor of New Mexico and seemingly covert candidate to the 2012 Republican presidential nomination Gary Johnson may be polling in the single digits and only just managed to get himself on a debate state this week, but with that appearance made enough of a splash to have caught the media’s eye, and they are intrigued. Shortly after the debate, GQ published an extensive profile on Johnson that reveals he prefers events like the “Porcupine Freedom Festival” to actual fundraisers and seems to apologize every time he mentions he is running for President.

The piece, by Lisa DePaulo, begins with an awkward exchange at a bike shop– awkward because Johnson mumbles something off-handedly about “the president thing” and the store owners seem intrigued, but Johnson insists he would rather not talk about it. One would be forgiven for thinking, “no wonder no one knows who he is.” He has only two campaign staffers who are depicted as at the brink of ripping their hair out every time Johnson refuses to address that he is running for President with a crowd, or every time the campaign credit card defaults (this happens often, apparently). They are with him when he attends the Porcupine Freedom Festival, one of the few places outside of New Mexico where people actually know who Gary Johnson is, but instead of encouraging people to vote for him, Johnson walks around saying nice things and Rep. Ron Paul and warning anarchist youth they should probably pay their taxes. This is a typical exchange in the piece for Johnson:

Then he moves south to the part of the campground dominated by the anarchists, who are separated from the Libertarians by a swing set—and who, by definition, aren’t even going to vote. But Gary doesn’t want to just blow them off. He ends up in a long conversation with a guy named “Puke” and another dude in a red hoodie who wants to tell the presidential candidate how he became “the sovereign king of myself.” Gary listens as the 20-year-old tells him how he doesn’t pay taxes and drives without a license. “I understand how you feel, but listen, son…” And gently but firmly points out that those things could get him arrested. “That wouldn’t be good for you.”

That DiPaulo starts off with what makes Johnson such a long-shot candidate, despite an extensive resume that includes being the only governor in the 2012 race who is actually viewed favorably in his home state, which gives all the reasons he is ignored– the marijuana jokes, the fact that he doesn’t seem to like campaigning all that much– an air of the trivial compared to what he actually did in his home state, at least compared to anyone else on the Republican debate stage. It is not shocking to get Johnson’s assessment of the other candidates and find that he is “fascinated” with Jon Huntsman, one of the several candidates actually trailing Johnson in some polls:

While he has been persona non grata, he has watched as first Bachmann, then Huntsman, and now Perry have each been treated like the Second Coming. Huntsman, in particular, fascinates Gary. And in a weird way, gives him hope. The Utah zillionaire has Annie Leibovitz photographing him for Vogue but is still polling in Gary-territory—worse than Gary territory! Johnson is a point or two above him in the polls right now—despite Huntsman plowing millions of his own money into his campaign and gracing numerous magazine covers. Maybe the media isn’t all that powerful!

The article is also a minefield of extraordinary factoids about Johnson himself, paramount among these that he climbed Mount Everest with a broken leg, and hoped to climb the three of the Seven Summits that have eluded him during his presidential tenure. It rapidly becomes clear that Johnson shatters most conventional definitions of the word “sane,” the key adjective of the profile. Yet there is something comforting, especially compared to the likes of Mitt Romney and Rick Perry, about Johnson’s shameless love of Costco, in how passionately he takes his hobbies and how he shelters his anonymity from any significant attack. It may not win him the presidency, but it’s hard not to view Johnson as, at the very least, one of the more extraordinary Americans currently involved (and I use the term loosely) in national politics.