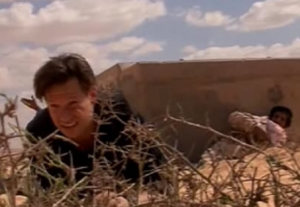 For most Americans up-to-date on current events, the recent wave of Middle East reports has been both jarring and commendable, with journalists routinely putting their lives on the line to bring home the most compelling reports. But not all in the media managed to avoid falling victim to their own cynicism from their nice comfy offices, in particular GQ editor Jim Nelson. In this month’s issue, Nelson chose to mock “important-looking Caucasians” and that “handsome young black reporter” on cable news for daring to care about foreign developments.

In his monthly address to readers, Nelson acknowledges the brutal awakening he received with news in Egypt, Libya, Yemen, et al from his self-described “naivete”– a naivete his ascribes to most Americans, and certainly to all of news media. “One day,” he quips, “it was a normal media universe: newsreaders tossing harmless inanities at each other, cooing over video of some overgroomed terrier at the Westminster Dog Show… And the next thing you knew, our TVs went totally Al Jazeera.” To Nelson, it was a shock to the system that journalists were covering the Middle East with interest, a new development only if one discounts the ongoing coverage of the wars in Iraq and Afghanistan, the coverage of the polemical Iranian election in 2009, the perennial reports of violence in Gaza, etc. “I love watching journalists when they start acting hugely interested in stuff they never cared about… such as Arabs,” he sneers.

Certainly not all journalists covering the turmoil in the Middle East deserve Pulitzers, and much of what we see on cable news in particular can be superficial and downright disingenuous. Taking reports with a hint of salt is wise, and Nelson does no wrong in keeping an eye open, but to mock news reports and their reporters crosses a line from healthily detached to insulting and dismissive. Where most Americans saw journalists putting their lives on the line to expose countless abuses in dictatorships notorious for their zero-tolerance policies about freedom of information, Nelson saw “important-looking Caucasians telling us how significant-feeling everything was.” Caucasians, one imagines, like Anderson Cooper, who suffered two attacks in Egypt before calling it a day, or the New York Times reporters who were detained in Libya, or, at the unthinkable extreme of suffering on the front lines, Lara Logan. Real journalists have suffered serious consequences trying to bring back the most accurate updates from the region, and to dismiss them all for treating the collapse of sovereignty in an entire region of the world as “significant-feeling” for the sake of sounding trendily aloof does a disservice to our reporters on the front lines, and is beneath a publication like GQ.

But white people weren’t the only ones vulnerable to Nelson’s ridicule. Particularly grating to Nelson appeared CNN’s “handsome young black anchorman who looks like he would never get his hands dirty with newsprint” (Don Lemon?). Was he just a second or two short of calling him “clean and articulate,” or “with no Negro dialect,” or something else? This anchor, Nelson narrates, “acted completely starstruck when talking to a real-life foreign correspondent” (lest you think Nelson would leave us hanging on the correspondent’s nationality, he makes sure to let us know he is Australian, “as [foreign correspondents] often are”). Nelson concludes accusing the correspondent, again, of naivete, and then brings the editorial full circle with an Anderson Cooper dig. “I wish I could get out of this anchor seat, travel the world, and get my head punched like Anderson Cooper,” the anchor thinks to himself in Nelson’s version of the tale.

Ultimately, while Nelson appears to revel in playing armchair pundit, he leaves open-ended what he would prefer to see from the media while the people of the Middle East continue to revolt and change the landscape of that region forever. Would he like that “handsome young black reporter” to sully his hands with newsprint (perhaps a copy of GQ)? Should they ignore the Middle East entirely and instead focus on the latest fashion trends? Or perhaps the solution would be for journalists to act with total apathy towards their life’s work. Passion for one’s profession is so last season.