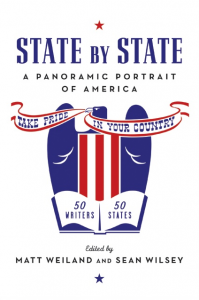 On a beach? Relaxing at home? Wondering how to spend your post-BBQ stupor? Mediaite has just the thing for your Fourth of July weekend reading jones — books! Yes yes, we had them long ago, before the iPad. Here are a few favorites from Mediaite’s staff, columnists and contributors. We hope you enjoy and learn from them as much as we did (and will, when we all read each other’s recommendations!). Hope you’re having a terrific July 4th!

Let’s start with State By State: A Panoramic Portrait of America, a terrific anthology edited by Matt Weiland and Sean Wilsey. This book is, first of all, a fantastic reference (and as a Canuckian I have found it helpful more than once). It literally goes state by state — from Alabama to Wyoming — with gorgeous, personal and all-around delightful essays by lit luminaries like George Packer, Josh Ferris, Sarah Vowell, John Hodgman, Heidi Julavits, Susan Orlean, Jhumpa Lahiri, Alexander Payne, Jonathan Franzen, and however many others make up 50. There is a great photo gallery, plus per-capita factoid tables at the back (Utah is the youngest; New Hampshire has the most roller coasters; South Carolina has the most violent crime; Wyoming guzzles the most gas; West Virginia is fattest and most toothless; Montana has the highest military recruitment rate). It will make you want to road-trip across the country and spend ten years doing it. — Rachel Sklar 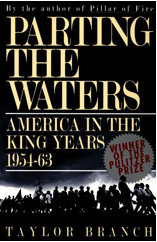 I’ve always been a fan of contemporary history and no book makes me feel prouder about the American experience, oddly enough, then to read about the Civil Rights Movement and Dr. Martin Luther King. Branch’s book is practically a day-to-day retelling of the move from Jim Crow America into the heart of the Civil Rights Movement. The work of King and other civil rights leaders created the model that all later movements (women’s rights, gay rights) would borrow and create “the language” of social change in the U.S. Living just outside of Washington, D.C., I drive by the Lincoln Memorial probably four times a week and it still takes my breath away to see the Memorial, but also think about King speaking before the assembled crowd in 1963 giving his epic “I Have a Dream” speech. Branch’s book isn’t beach reading, but I still love to pick it up and thumb through the pages reading about people who really did change modern America. — Michael Triplett 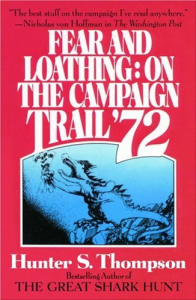 Apparently, I own a lot of books that could be considered patriotic – particularly if you’re willing to include titles that push the boundaries of political advocacy. I’ve got The Reader’s Companion to American History and The People’s History of the United States. The Americans and These United States. Thompson’s Fear and Loathing on the Campaign Trail, Meacham’s American Lion. I’ve got the Federalist Papers, and Robert Penn Warren’s All the King’s Men.

These last two – a collection of the founding documents of our nation and a fictionalized tale of a corrupt elected official – have corollaries that are also in my collection. These corollaries, with twists on those two themes, are my recommendations. — Philip Bump

In the summer of 1987, my family took a trip around Lake Ontario to Toronto. This was the 200th anniversary of the ratification of the Constitution – an event that lacked the fanfare of the nation’s bicentennial only outside of the world of academic historians.

Being a nerdy kid and an American history buff, someone gave me this book, published specifically for the anniversary. A comic book-style deconstruction of our nation’s most important document, I read it voraciously as we made our way into Canada.

It wasn’t trivial. It may have been made accessible using a cartoon format, but it dove deep into the decision-making process behind the document and the legal battles that refined its implementation. I learned about the battle of Wilkes-Barre, Marbury vs. Madison, and each of the Amendments. The book was clearly designed for folks with a decent awareness about history; occasional pop quizzes asked the reader to, for example, “explain the Emperor Norton.”

It’s out of print now, having made only one run on the presses that year. But it’s available used online, which is where I got my copy a few years back. It’s on my bookshelf, ready to entertain the children I’ll one day have in the back of a car I’ll one day own (assuming, God willing, that they’re nerdy and history buffs). They’ll have one advantage – they’ll be able to simply look up “Emperor Norton” to get a perfect score on the quiz. I had to wait until kids a few years older than me invented Google. 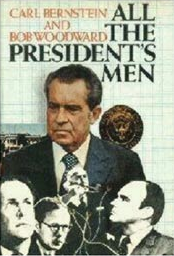 All the President’s Men by Bob Woodward and Carl Bernstein

All the President’s Men, in detailing Woodward and Bernstein’s slow, meticulous, sputtering uncovering of the Watergate scandal and the role of the Executive branch in exceeding legal limits, is a fascinating read. (And a great movie – that you can watch instantly on Netflix.) But it’s also an important historical document detailing both the perfidies of our nation’s leaders and the efforts of independent (albeit well-equipped) citizens in revealing the truth.

Their methods are archaic; the crisis the nation faced fades more in our memory each year distant. The message, though, remains – and it’s one of particular interest to those in the media. It is this: There is always more that can be learned about how our government functions, and it’s incumbent upon us to learn and share it. Whether it’s the corruption of a President or the decisions of a municipal decision-making body, we are all required to be informed about the nation we live in.

What Woodward and Bernstein accomplished made them rich and famous. But it also made our nation stronger, more transparent, and, on the whole, better.

What is more patriotic than that? 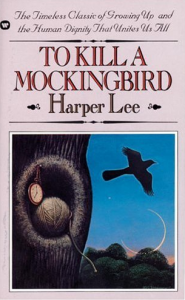 To Kill a Mockingbird, by Harper Lee
This book hardly needs any introduction. Fifty years after publication, the novel remains a classic with striking relevance in what is a far from post-racial America. The idealist protagonist Atticus Finch manages to instill a sense of hope, despite being a fictitious character. You’ll find yourself wondering why more people don’t have the same kind of mentality: if Atticus can look past race, why can’t we? Furthermore, many of the book’s words from 1960 ring true as if they were written today: “sometimes the Bible in the hand of one man is worse than a whiskey bottle in the hand of–oh, of your father.” While the book definitely points out the country’s flaws, the overall tone will leave you more optimistic than any speech President Obama can muster. 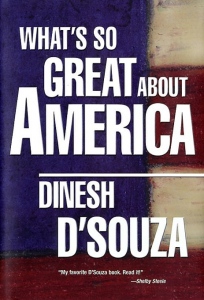 What’s So Great About America, by Dinesh D’Souza
A distinguishing characteristic about this book is that it is written from an immigrant’s perspective–with D’Souza having come to American from Mumbai, India. Staunchly positive, he argues that the United States, “once an experiment unique in the world, is now the last best hope for the world.” The book touts the unsurprising American ideals of liberty and justice for all–but what makes it interesting is how it also points out the simpler things that are often overlooked by those who were born and bred here. The roads are smoothly paved, the phone has a dial tone, the grocery store carries “every imaginable product.” When D’Souza asks a fellow Mumbai man why he wants to go to America, he gets the reply: “Because I really want to move to a country where the poor people are fat.” And that, ladies and gentlemen, is what makes America great. — Mediaite summer intern Meenal Vamburkar 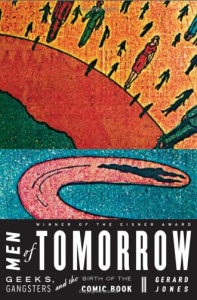 Men Of Tomorrow: Geeks, Gangsters, and the Birth of the Comic Book, Gerard Jones’ book on the birth of the comic book, is a great American story. Lower East Side immigrants creating a new art form, small town kid creating Superman to make himself feel better about his father being murdered, companies using these heroes to help get American kids (and adults) through the war, etc. It’s my great American story. — Jedd Katrancha 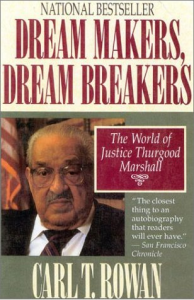 Confession: I had not heard of Dream Makers, Dream Breakers: The World of Justice Thurgood Marshall, by Carl T. Rowan, before last week, when I published this by Danielle Belton, aka The Black Snob. She calls it “one of my favorite books to this day” and apparently it’s a Black History Month reading list staple. Belton points out it’s an every month staple, too; I will add to that that it’s probably a legal staple as well, and as a former lawyer the combo was enough to put it on my Amazon holiday purchase list. Buying books is patriotic! Anyway, Publisher’s Weekly called it “richly readable” and it said it was a six-week PW bestseller. Maybe Glenn Beck can help make it popular again! 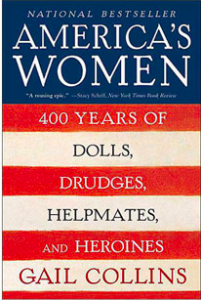 Speaking of Glenn Beck, I can’t believe that’s the launching point for me to mention Gail Collins and her fabulous America’s Women: 400 Years of Dolls, Drudges, Helpmates, and Heroines, but since it’s one of Glynnis MacNicol’s favorite books that seems natural. Oh wait it’s also natural because she *just* wrote about it while writing about Glenn Beck and his teachings about the Founding Mothers. Quoth Glynnis: “A few years ago Collins penned America’s Women: 400 Years of Dolls, Drudges, Helpmates, and Heroines a highly engaging (highly recommended) survey of the under-reported, fundamentally integral, vital, and frequently deadly role women played in the building of this country. Want to talk about the sort of American history that doesn’t get taught enough in schools you can start right there!” Here’s Glynnis’ take: “With her usual, often revealing wit, Collins has created a hard-to-put-down read that will leave you with not only a deep, and sometimes jarring, appreciation of the often terrible struggles women faced for most of this country’s history but also enormously grateful you were born late enough to miss most of it. Needless to say, just like her NYT op-ed columns, it’s also great fun.” Gee, sounds like a book I’d like to read! What, I haven’t read it, you ask? Nope – I bought it….and then lent it to Glynnis. She loved it so much I couldn’t take it back. She then loaned it to Melissa Lafsky. Paying it forward! Glenn Beck would be so proud. 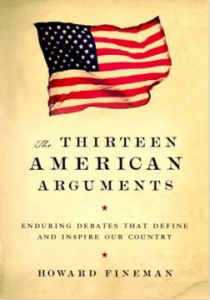 For those of you feeling a little punchy this weekend, go ahead and wrangle over The Thirteen American Arguments: Enduring Debates That Define and Inspire Our Country by Howard Fineman. Some of the questions argued about: Who Is A Person? Who Is An American? What is the Role of Faith? What Can We Know and Say? Stuff you can really sink your teeth into. I love the idea behind this book — that we are constantly evolving and refining the answers, or at least caring enough about them to think, talk and passionately argue about them. And they are relevant as hell, too — “Who is a person?” has come up as recently as the BP Oil Spill, with BP’s corporate personality being raised as an issue in payback, liability and related issues, as well as at the beginning of the year when the ban on corporate political spending was lifted by the Supreme Court. If you think about it, the past year of intense political wrangling over the Tea Party and health care and immigration and pretty much everything can come down to these arguments (“The Terms of Trade” “War and Diplomacy” “Who Judges the Law?” — a Wise Latina? — “The Environment” “Presidential Power” “Debt and the Dollar”) — Fineman published this book in early 2008 but wow do these issues still have this country wrangling today. — Rachel Sklar