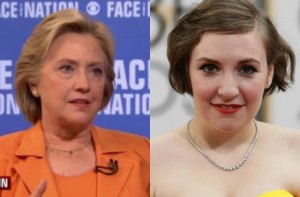 Despite being one of Hillary Clinton‘s most enthusiastic supporters in public, The New York Times reports that Girls star Lena Dunham once trashed the Clintons’ treatment of rape accusers during a private industry event.

The anecdote opens a larger piece by the Times‘ Amy Chozick detailing many millennial feminists’ discomfort with how Clinton treated her husband’s accusers.

This month, Lena Dunham, wearing a red, white and blue sweater dress with the word “Hillary” emblazoned across the chest, told voters how Hillary Clinton had overcome sexism in her political career.

“The way she has been treated is just more evidence of the fact that our country has so much hatred toward successful women,” Ms. Dunham, the creator and star of the HBO series “Girls,” said at a Clinton campaign event in Manchester, N.H.

But at an Upper East Side dinner party a few months back, Ms. Dunham expressed more conflicted feelings. She told the guests, at the Park Avenue apartment of Richard Plepler, the chief executive of HBO, that she was disturbed by how, in the 1990s, the Clintons and their allies discredited women who said they had sexual encounters or been sexually assaulted by former President Bill Clinton.

The Times reports that the private conversation at the HBO executive’s home was relayed to them by several people in the room. However Dunham’s spokeswoman denied it ever happened, saying the actress was “fully supportive of Hillary Clinton and her track record for protecting women.”

Dunham has spoken openly about how she was the victim of sexual assault in college. Her retelling of that story in her most recent book also generated controversy when conservative publications like Breitbart pointed to discrepancies in her story, and when the person she named as her assailant threatened to sue Dunham’s publisher Random House.