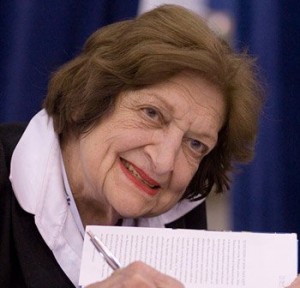 Helen Thomas‘ returned to her Falls Church News-Press column today and, less than 24 hours after her first post has been published, she’s already inspired a new wave of controversy. Only, this time, it’s not for something Thomas has said.

The FCNP’s owner, Nicholas F. Benton, welcomed Thomas back with open arms – and a defense of Thomas’ previous comments about Zionists watching you as you sleep. Benton wrote that, despite her contentious comments about Jewish people, he remains “firmly convinced that she is neither bigoted, nor racist, nor anti-Semitic.”

Well, the New York-based American Gathering of Holocaust Survivors and their Descendants, for one, happens to disagree. The group’s vice president, Elan Steinberg, had this to say about Benton’s comments:

Mr. Benton may hire whomever he wants, but his whitewash of Helen Thomas’ monstrous comments is unacceptable and a disgraceful perversion of facts. This is particularly unseemly for a member of the journalism profession.

In June, we were aghast when Helen Thomas shockingly told Jews in Israel to go back to places where our families were burned and gassed during her living memory. Compounding this, last month she repeated the anti-Semitic canard that “Zionists” control the government and Wall Street – a monstrous harangue we know only too well.

The issue here is not whether Mr. Benton can hire her to write – of course he can. But in misrepresenting the heinous character of her remarks, he has disgraced himself.

It’s nearly impossible that Benton wouldn’t have anticipated that his comments would have garnered some sort of reaction. We shall soon see, we suppose, whether Benton, his paper, or Thomas herself issue some sort of response, or simply sit back and enjoy the warm glow of the spotlight.