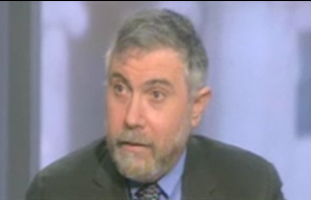 Season’s greetings? Speaking on This Week With George Stephanopoulos this weekend, New York Times columnist Paul Krugman warned that there is still a “reasonably high chance” of a sharp economic contraction in 2010. As optimistic as the financial markets have been, Krugman said that he doesn’t see “where it’s supposed to come from,” and is especially worried about the second half of the year.

Fortunately, Krugman pegged the odds of a contraction at less than 50%. From This Week: (transcript via ABC)

TAPPER: OK, we are getting close to short on time but I do want to ask you a question about the economy for 2010. Your fellow laureate, Joseph Stiglitz has said there’s a significant chance the U.S. economy will contract in the second half of 2010. He’s calling on the government to prepare a second stimulus. Do you think that’s possible?

KRUGMAN: Yes, it’s a reasonably high chance. I don’t think it’s more — it’s less than 50/50 odds, but you know, what we’ve got right now is a recovery that first of all is not showing up very much in jobs yet. It’s being driven by fiscal stimulus which is going to fade out in the second half of next year and by inventory bounce. You know, production was low because companies were running on their inventories. They’re stopping doing that so now you’ve got a bounce in the economy.

Earlier this year, Krugman made the prediction that the U.S. economy could remain depressed for as many as five years, into 2013 or 2014.

Here’s the video, via The Daily Beast: (h/t Breitbart)