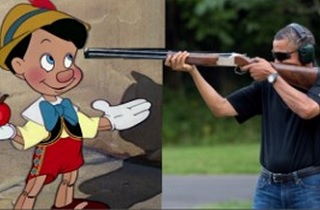 Washington Post fact-checker Glenn Kessler really wants President Obama to be wrong, as his history of contortions to that effect demonstrate. To that end, Kessler has published the third in a trilogy of analyses which have progressively moved the President’s claim, that “as many as 40 percent of all gun purchases to take place without a background check,” from zero to three Pinocchios. While slagging the President may be good for business, the effect of Kessler’s false ruling is to undermine legitimate efforts to keep the public safe, and to obscure the real enemy of reliable data on gun violence.

The specific claims that Kessler evaluates are the President’s March 28 declaration, in a speech, that “as many as 40 percent of all gun purchases to take place without a background check,” and a later tweet that read “FACT: Nearly 40% of all gun sales don’t require a background check under current law. #DemandAction”

The twin pillars of Kessler’s ruling are a distinction between the words “purchases” and “transfers,” and the age and reliability of the study the White House cites to support the claim:

There are two key problems with the president’s use of this statistic: The numbers are about two decades old, yet he acts as if they are fresh, and he refers to “purchases” or “sales” when in fact the original report concerned “gun acquisitions” and “transactions.” Those are much broader categories of data.

Kessler goes on to slice up the figures, using information that wasn’t actually in the original report, to arrive at a figure of as few as 26.4% of gun owners who “purchased” their guns without a background check. Along the way, Kessler dishonestly presents the “sample size” of the survey as 251 (it was 2,568; only 251 people answered that particular question), notes the study’s margin of error (plus or minus 6 percent), and factors in information that Kessler sought from the study’s author in January, that wasn’t included in the report that the President cited. You can read all of it, if you have the patience, but let me save you the trouble: based on this study, it is possible to conclude that as few as 26.4% of gun owners in that study “purchased” their gun without a background check, 20.4% if you factor in the margin of error.

Unfortunately, that’s not the claim the President made. He said “as many as 40 percent” of gun purchases were made without a background check. You can argue among yourselves whether it matters to you if your face is shot off with a gun that once sported a big red bow, but if your aim is to extrapolate, from that study, the maximum possible number of gun transfers without a background check, the figure would be 49%:

Fifty-seven percent of firearms were obtained from stores, pawnshops, or other sources that the respondents were certain to have been federally licensed firearm dealers.

The study that the White House cited listed the method of obtainment and the source separately, so it would be fair to count all transfers as possible purchases, which means, if you factor in the margin of error, it would be accurate to say that as many as 49% of gun purchases in this study were made without a background check. As it turns out, President Obama was being kind to the gun nuts.

But even if you take Kessler’s assumptions about purchases versus transfers into account, the President is still on the mark. The study’s author stated, in an earlier review of the data, that 10% of respondents who reported receiving the guns as a gift said they thought the gift-giver was subjected to a background check. Subtract that from the 43% of guns that were purchased at locations other than a store, and you get 33%. Factor in the margin of error, which Kessler is happy to use to impeach the President’s claim, and you get 39%. By any measure, the President’ statements are accurate, based on that study.

According to Kessler’s own rating scale, then, the President might be guilty of a one Pinocchio offense due to the age of the report, but that wouldn’t really be fair, either. As Kessler himself noted in an earlier post (but not in his most recent one), proponents of gun regulation can’t really be blamed for the absence of more recent information:

We are faced with a conundrum here. We generally believe politicians should use the most up-to-date and relevant information available, but congressional foes of gun control have made it difficult to improve on obviously stale information.

The small sample size is also a serious problem, but again, roadblocks have made it difficult to do a more comprehensive survey.

The exact opposite is true, and I would argue that the President’s claim, as formulated, is a tremendous lowball. The fact is that as many as 100% of gun purchases require no background check. 100% of criminals, terrorists, crazy people, and prospective first-time murderers now have the opportunity, at their own option, to purchase enough weaponry to kill hundreds of people, without a background check. Fact-check that, Glenn.