David Brooks Reveals His Son Is Serving in the Israeli Army

David Brooks Reveals His Son Is Serving in the Israeli Army 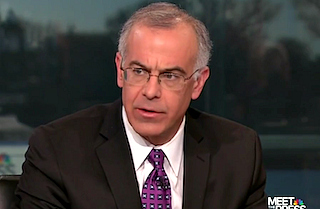 In a recent interview with Israeli paper Haaretz, New York Times columnist David Brooks revealed that his son was currently serving in the Israel Defense Forces.

According to the Jewish Journal’s translation of the article, Brooks said that his 23-year-old son was a “lone soldier” — i.e., a soldier without any immediate family in Israel — and that he’d joined the service a few months ago:

“‘It’s worrying,'” says Brooks, ‘But every Israeli parent understands this is what the circumstances require. Beyond that, I think children need to take risks after they leave university, and that they need to do something difficult, that involves going beyond their personal limits. Serving in the IDF embodies all of these elements. I couldn’t advise others to do it without acknowledging it’s true for my own family.'”

So far, Brooks hasn’t disclosed his son’s service in any of his Israel-related columns — his most recent one was published on July 28th of this year — and his lack of disclosure has been raising some eyebrows, especially due to the Times’s strict policy on disclosure rules: back in 2010, a watchdog group revealed that the Jerusalem bureau chief of the Times had a son serving in the IDF. Though Bill Keller, at the time the paper’s Editor-in-Chief, had no problem with it, the paper’s ombudsman suggested that the bureau chief be reassigned. “Stepping back, this is what I see: The Times sent a reporter overseas to provide disinterested coverage of one of the world’s most intense and potentially explosive conflicts, and now his son has taken up arms for one side,” he wrote. “Even the most sympathetic reader could reasonably wonder how that would affect the father, especially if shooting broke out.”

However, given Brooks’s position as a columnist (and not a reporter), he could have some leeway, the Journal‘s Rob Eshman argues. “Brooks is a columnist– he’s supposed to take sides, and supposed to make his opinions known. Columnists regularly dragoon their personal experiences in service to their writing– many write directly out of their family lives.”