In Lieu Of A Big Red X, Time Magazine Cover Has Gaddafi Blowing Away 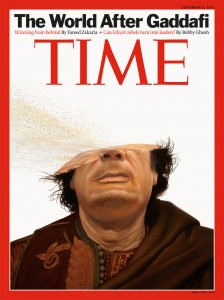 Time faced a tough challenge in sorting out their cover for this week. Earthquakes and hurricanes aside, the end of Gaddafi‘s 42 year reign was arguably the week’s biggest story. Time has traditionally marked fallen tyrants on their covers with big red x’s scrawled across their face; Osama Bin Laden being the most recent example, and with Abu Musab al-Zarqawi, Saddam Hussein and Adolf Hitler in the past. In vein, they used a black x to mark Japan’s surrender from WWII. But Gaddafi has not yet offered himself up for surrender, nor can anybody find him. He’s not so simply, ready to be big-red x-ed out, gone.

Instead, they went with this striking illustration of Gaddafi being blown away, bit by bit, with the sands of time. Tim O’Brien, the man behind the cover, has an interesting run-down of process on his personal blog. “I liked this one because if he did not get an X, what could it be?” he writes.

Using a composite of images (a photo of himself for the hair included), he built an image that looked recent and showed little affectation. “In the end,” though, he writes, “I needed leess of him that [sic] usual.” He says he thought of “time running out on Gaddafi,” and so he sketched up a few hourglasses and began to play. “In doing this hourglass sketch I saw that he would work with his face as sand,” he writes.

There was a moment of fear, says O’Brien, when news of Wednesday’s earthquake broke just ahead of his deadline. In the end, though, his strong image insured that the Gaddafi story would be kept on the cover.