Iran, Iran So Far Away: Mitt Romney Talks Tough Now, Wanted To Check With Lawyers In 2007 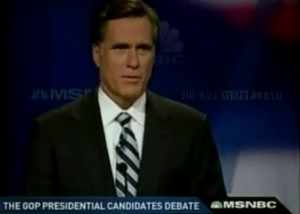 On the heels of President Obama’s tough, well-received speech to AIPAC this past weekend, leading GOP presidential candidate Mitt Romney is out with a butch new op-ed that continues his self-reinvention as a foreign policy Chuck Norris. However, progressive SuperPAC American Bridge has released a web video to remind Americans that, just like his declaration that “any president” would have greenlit the Osama bin Laden raid, the Mitt Romney of 2007 clucked a different tune.

In December, Romney told MSNBC’s Chuck Todd that “any president” would have carried out the raid that killed Osama bin Laden, and added, “I think other presidents and other candidates like myself would do exactly the same thing.”

“Any president” apparently didn’t include a President Romney, since when then-Sen. Barack Obama promised, in 2007, that he would pursue a unilateral raid to kill Osama bin Laden into Pakistan, Romney made clear that he would have waited for a green light from Pakistan. Now, his similarly tough talk on Iran is similarly undermined by his own past statements.

Lest you think American Bridge is being unfair to Romney, here’s his full answer:

Surprisingly, the best answer given to this question at that 2007 debate came from Fred Thompson, who at least correctly framed the tension between Congress’ Constitutional authority to declare war and the War Powers Act:

I would add that under the War Powers Act, there’s always a conflict between the Congress and the president as to the exact applicability of that when an engagement lasts for a particular period of time and when they must come before Congress.

I don’t think anybody running for president should diminish the power of the office before he gets there and take side in a hypothetical dispute. But I would say that in any close call, you should go to Congress, whether it’s legally required or not. Because you’re going to need the American people and Congress will help you if they’re voting for it or if they support it, or leaders, especially in the opposite party, are convinced and looking at the evidence that this is the right thing to do, that will help you with the American people.

And we have learned that, over the long term in any conflict, we’ve got to have the strong support of the American people over a protracted period of time.

Whatever your position on the powers of the presidency, it’s safe to say that most people don’t want a president who will treat the decision to go to war like it’s an IPO.