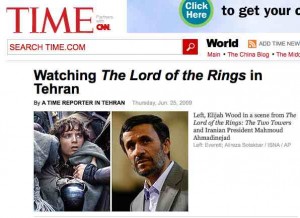 ‘Watching The Lord of the Rings in Tehran‘ is the number three most read story on Time.com right now. As has been noted on Twitter the irony that the country is trying to distract its citizenry with an epic story (originally penned by a Brit, no less) about an unstoppable evil force ultimately overthrown by the little people (in this case literally) is hard to miss.

What is also hard to miss here is the byline: ‘A Time Reporter in Tehran.’

At this point even the most casual news consumer is likely aware that it is increasing difficult and dangerous to get verified news out of Iran and that many mainstream news outlets have come to depend on Twitter and Facebook and the like for on-the-scene (and still unverified) reports. What’s interesting in this case is that Time has chosen in this byline to refer to the anonymous contributor as a ‘reporter’ and the followed up with this clarifier:

On June 23, Iranian security forces, reportedly using live ammunition, clashed with protesters numbering in the hundreds in the area of the country’s parliament in Tehran. At the same time, there were indications that a behind-the-scenes struggle was intensifying in the corridors of power even as the government continued its campaign to quiet the populace through propaganda and entertainment. A resident of the capital, who asked for anonymity, sent TIME the following report: [Emphasis ours]

That last line suggests that the ‘reporter’ in question is less a reporter, as we have come to understand the term as it is normally applied at Time, than a citizen journo as we have come to understand the term as normally applied in the online world. This is far from a criticism, mind you! We want the news from Iran, as and people accustomed to getting ‘news’ from any number of outlets this strikes as the norm, particularly as the Iran story unfolds. And perhaps the source is in fact a Time reporter in Iran, though the caveat makes that seem less than likely.

Perhaps there a MSM lesson to be found here? Something along the lines of if the MSM doesn’t find social media it will eventually find them.