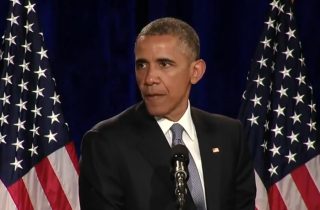 As we reported this morning, President Obama is considering bypassing Congress in order to implement further gun control measures, and the conservative media wasted no time in going after our ruthless dictator.

Sitting behind an emboldened red banner and vibrant ‘ALERT’ notification, Fox host Gregg Jarrett opened his segment by criticizing the President’s actions. He said, “After the Sandy Hook shooting, the President took 23 executive actions against guns. None of them have prevented things like Oregon or Charleston.”

WHAT? 23 executive orders? That’s so insane that Obama should qualify for the very mental health treatment that the right wants to push over gun control.

I sat stunned at this revelation dramatically pushed by Jarrett. 23 seems like a lot; no wonder Sarah Palin once decried our President’s move on an executive order as “giving the middle finger” to voters.

Regarding a different Obama executive action, House Speaker John Boehner said, “President Obama has cemented his legacy of lawlessness”; he once even threatened a law suit. Charles Krauthammer considered it an “impeachable offence.”

This year Texas Republican Representative Lamar Smith told Fox’s Stuart Varney, “This is a President who has, in an unprecedented way, used executive orders, executive actions, to go around Congress.”

I did some digging, and found that our Fascist In Chief has issued a whopping 219 executive orders during his time as President. The right is right: this man is out of control.

If there is any element of this deemed admissible to the argument of precedent, it is not in the quantitive data, especially the emphasis on “23” by Jarrett today. But in case anyone is confused about the role of executive action in regards to the Presidency, I pulled a few other stats regarding these mandates by the numbers. Care to see?

Perhaps the Republicans would have preferred Obama act more like William Henry Harrison, who is the only Commander in Chief in US History to never issue an executive order.

He also died a month after his inauguration.

Dwight D. Eisenhower, the President that Republicans tend to disown because of his sky high tax rates on the wealthy, issued 484 executive actions in office.

The Emancipation Proclamation? An executive order by Abraham Lincoln.

The only reason we have the Grand Canyon to enjoy is because Teddy Roosevelt issued an executive order to protect it in 1906. He would add 1,080 more.

And President Franklin Delano Roosevelt, the leader who healed our country when our fractured economic and social climates most matched that of today, issued a whopping 3,522 executive orders. His Civilian Conservation Corps was Executive Order 6101 signed April 5, 1933. (Also, his policies that fixed our broken country were largely socialist in nature, but that’s a column for another day.)

President Obama has long referred to his own executive orders by the moniker “the pen and the phone”, and may increase his right to this power to combat the finally-politicized epidemic of gun violence. In fact, he could issue an executive order every single day for the rest of his Presidency and still only total about half as many as Republican Calvin Coolidge did.

The practice of going around a stubborn Congress to get things done in Washington isn’t “unprecedented”, it’s the status quo. And despite what you may be told, the fact remains: this President has so far landed well under his allotted quota.